The craziness of Lovecraft Country is nothing compared to the insanity of the past week, but the HBO series is unfortunately back making waves anyway. More specifically, it’s back to making obvious yet ridiculous parallels between 1955 and today. The latest example comes courtesy of an apparent comparison of George Floyd to Emmett Till and an “I can’t breathe” reference. 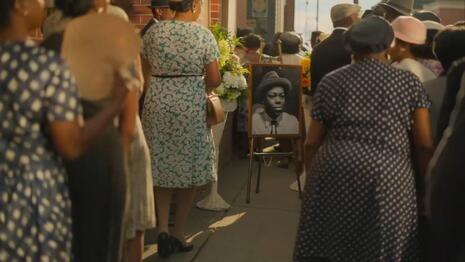 The October 4 episode “Jig-A-Bobo” opens shockingly at Emmett Till’s funeral in 1955. This scene reveals that he was, in fact, a close friend of Diana’s (Jada Harris), the cousin of our main character Tic (Jonathan Majors). Being a young girl, she’s haunted by this event, and Emmett Till was the innocent victim of a horrifically evil murder. However, at least to one of the writers, the scene represents way more than just Diana’s reaction, drawing comparisons to George Floyd.

Bobo’s funeral was on one of the hottest days of the year. The city was on fire, and the people had had enough. Sounds familiar, right?#CruelSummer#LovecraftCountry #LovecraftCountryEp8 pic.twitter.com/qI0EJD60rI

Another scene makes modern parallels more obvious when Diana is confronted by two white policemen. The two officers are actually members of an ancient magic cult, but that doesn’t stop one of them from basically choke-holding the girl as she shouts “I can’t breathe!” In case you need a reminder, all white people are evil in this series, and none of them are more evil than the police.

Captain Lancaster: This yours?

Diana: She’s on a trip for her job.

Captain Lancaster: Where’d she go on this trip?

Captain Lancaster: What do you know about magic?

The people behind it aren’t shy about making comparisons. Actress Jurnee Smollett tweeted out “I. CAN’T. BREATHE.” shortly after the scene aired in case the moment was too subtle for viewers. The show was filmed ages before Floyd’s death, so while that phrase has become associated more recently with him, before that Black Lives Matter made it a rallying cry for Eric Garner.