Gag me with a Shining City! On today’s Morning Joe, Joe Scarborough slobbered over Joe Biden’s acceptance speech at the DNC convention last night. Scarborough had the chutzpah to repeatedly refer to Biden’s address as “Reaganesque.”

Scarborough failed to recognize the glaring irony in two of his statements:

1. “The focus wasn’t on a flurry of policy prescriptions from the 1984 Democratic convention.” Of course not! Because if Biden had exposed his far-left positions—from pro-abortion extremism to support for the economy-destroying Green New Deal—it would have been unpalatable to most Americans. Biden has bragged that he’d be the most “progressive” president in history. His positions actually place him to the left of those ’84 San Francisco Democrats! Biden kept his radicalism hidden, dwelling instead on a variety of gauzy, feel-good themes. Joe Scarborough claims to speak for disaffected Republicans, but will they really vote to support socialism?

2. “Democrats and the Democratic nominee stepped into void created by the moral and political corruption of Donald Trump which we saw yesterday with arrest of Steve Bannon.”  The appearance of exquisitely partisan timing of Bannon’s arrest — hours before Biden’s speech — stinks to high heavens! But at MSNBC, it only adds power to Biden’s speech.

The “convenient” timing of Bannon’s arrest is reminiscent of the way that special prosecutor Lawrence Walsh brought new charges against former Reagan Defense Secretary Caspar Weinberger the weekend before the 1992 election. It came at a time when President George H.W. Bush was surging in the polls against Bill Clinton. Many Republicans believe the indictments doomed H.W.’s re-election hopes. 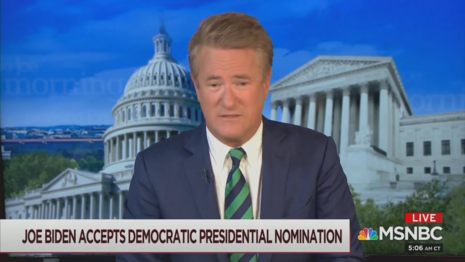 Scarborough’s slobbering over Biden’s “Reaganesque” speech was sponsored in part by Choice Hotels and Safelite.

JOE SCARBOROUGH: I think it had that appeal, even to some Republicans, because it was a speech that actually flipped the script on Republicans, whose leader has really twisted the soul of the Republican party now beyond recognition.

And you had Democrats, actually, and the Democratic nominee, stepping into the void that was created by the moral and the political corruption of Donald Trump, which we saw again of course yesterday with the arrest of Steve Bannon.

And instead he delivered a speech whose themes I think could have fit far better in an acceptance speech from Ronald Reagan than Mr. Trump. The focus wasn’t on a flurry of policy prescriptions from the 1984 Democratic convention, but rather, it was on values: family, faith, military service on his son, patriotism, and yes, perseverance through tragedy and, one of the most Reaganesque themes, the dream of a better day ahead and the belief that America’s best days are yet to come.

Now that is a speech that will stand in the starkest of contrast from Donald Trump and the Republican party that he believes is rich, white, resentful, angry, and Willie, filled with conspiracy theorists.

It is, again, the optimism was Reaganesque.