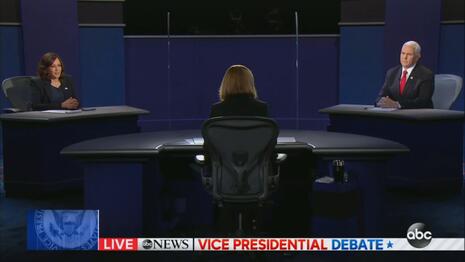 USA Today Washington bureau chief Susan Page failed on Wednesday night. On one of the most consequential questions of the age, whether Democrats in a Biden White House and in the Senate would change 150 years of precedent and pack the Supreme Court, the vice presidential debate moderator NEVER brought the topic up. MRC analysts reviewed every single question Page asked. We found she also never asked about Antifa riots, but instead wondered how a victorious Biden/Harris administration would forcibly evict Donald Trump from the White House.

But first, here is Page NOT asking about packing the Supreme Court. Instead, the moderator highlighted nominee Amy Coney Barrett and pressed Pence on Roe v. Wade: “[Barrett’s] confirmation would cement the Court’s conservative majority and make it likely to more abortion restrictions, even to overturning the landmark Roe v. Wade ruling.”

Page lectured, “Access to abortion would then be up to the states. Vice President Pence, you’re the former governor of Indiana. If Roe v. Wade is overturned, what would you want Indiana to do? Would you want your home state to ban all abortions?”

How bad is the journalistic malpractice on ignoring this issue? Even liberal ABC journalist Jon Karl, mid-debate, agreed it was a legitimate topic. He tweeted:

But that question came from Pence. Not the moderator.

Instead of asking pertinent questions about packing the Supreme Court, Page adopted liberal talking points, such as speculating about a victorious Biden/Harris team having to evict Trump and Pence from the White House:

A liberal-themed global warming query, of course, deserved a follow-up. Page grilled Pence: “Do you believe, as the scientific community has concluded, that manmade climate change has made wildfires bigger, hotter and more deadly and have made hurricanes wetter, slower and more damaging?”

Notice the contrast to Harris. A question about the Green New Deal is gentle and open-ended:

The American people deserve to know where the Biden/Harris campaign stands on issues like court packing. But journalists like Susan Page have and continue to refuse to do their jobs and demand answers.

Here are all of Page’s questions during the VP debate. Click “expand” to read more.

SUSAN PAGE: Let’s begin with the ongoing pandemic that has cost our country so much. Senator Harris, the coronavirus is not under control. Over the past week, Johns Hopkins reports that 39 states have had more COVID cases over the past seven days than in the week before. Nine states have set new records. Even if a vaccine is released soon, the next administration will face hard choices. What would a Biden administration do in January and February that a Trump administration wouldn’t do? Would you impose new lock downs for businesses and schools in hot spots? A federal mandate to wear masks? You have two minutes to respond without interruption.

PAGE: Vice President Pence, you were in the front row in a rose garden event of what seems to have been a super spreader event. No social distancing. Few masks. And now a cluster of coronavirus cases among those who were there. How can you expect Americans to follow the administration’s safety guidelines to protect themselves from COVID when you at the White House have not been doing so?

PAGE: For life to get back to normal, most of the people that can be vaccinated need to be vaccinated. But half of Americans now say they wouldn’t take a vaccine if it was released now. If the Trump administration approves a vaccine before or after the election, should Americans take it and would you take it?

PAGE: Vice President Pence, there have been a lot of repercussions from this pandemic. In recent days, the President’s diagnosis of covid-19 has underscored the importance of the job that you hold and that you are seeking. That’s our second topic tonight, it’s the role of the Vice president. One of you will make history on January 20th. You will be the vice president to the oldest president the United States has ever had. Donald Trump will be 74 years old on inauguration day, Joe Biden will be 78 years old. That already has raised concerns among some voters, concerns that have been sharpened by President Trump’s hospitalization in recent days. Vice President Pence, have you had a conversation or reached an agreement with President Trump about safeguards or procedures when it comes to the issue of presidential disability? And if not, do you think you should? You have two minutes without interruption.

PAGE:  Senator Harris, let me ask you the same question that I asked Vice President Pence, which is, have you had a conversation or reached an agreement with vice president Biden about safeguards or procedures when it comes to the issue of presidential disability and if not, and if you win the election next month, do you think you should? You have two minutes uninterrupted.

PAGE:  Thank you, Senator Harris. Neither President Trump nor Vice President Biden has released a sort of detailed health information that had become the modern norm until the 2016 election. And in recent days, President Trump’s doctors have given misleading information about his basic health. And my question to each of you in turn is, this is information voters deserve to know? Vice President Pence, would you like to go first?

PAGE: I want to give Senator Harris a chance to respond to the same question I asked, which is, do voters have a right to know more detailed health information about presidential candidates and especially about presidents, especially when they are facing some kind of challenge?

PAGE: You know, that’s a good segue into our third topic, which is about the economy. This has been another aspect of life for Americans, it’s been so affected by this coronavirus. We have a jobs crisis brewing. On Friday, we learned that the unemployment rate had declined to 7.9 percent in September, but the job growth had stalled and that was before the latest round of layoffs and furloughs in the airline industry, Disney and elsewhere. Hundreds of thousands of discouraged workers have stopped looking for work. Nearly 11 million jobs that existed at the beginning of the year haven’t been replaced. Those hardest hit include Latinos, blacks and women. Senator Harris, the Biden/Harris campaign has proposed new programs to boost the economy and you would pay for that new spending by raising $4 trillion in taxes on wealthy individuals and corporations. Some economists warn that could curb entrepreneur ventures that create jobs. Would raising taxes put the recovery at risk? And you have two minutes to answer, uninterrupted.

PAGE: Vice President Pence, your administration has been predicting a rapid and robust recovery. But the latest economic report suggests that’s not happening. Should Americans be braced for an economic comeback that is going to take not months, but a year or more? You have two minutes to answer, uninterrupted.

PAGE: Vice President Pence. Once again, you provided the perfect segue to a new topic, which is climate change. And Vice President Pence, I’d like to pose the first question to you. This year, we’ve seen record-setting hurricanes in the south. Another one, Hurricane Delta, is now threatening the gulf. And we have seen record-setting wildfires in the west. Do you believe, as the scientific community has concluded, that manmade climate change has made wildfires bigger, hotter and more deadly and have made hurricanes wetter, slower and more damaging? You have two minutes, uninterrupted.

PAGE:  I’d like to talk about China. We have, as our next topic, we have no more complicated or consequential foreign relationship than the one with China. It is a huge market for American agricultural goods. It’s a potential partner in dealing with climate change and north Korea. And President Trump blamed China once again for the coronavirus, saying they will pay. Vice President Pence, how could you describe our relationship with China? Competitors, adversaries, enemies? You have two minutes.

PAGE: Thank you. Senator Harris, let me ask you the same question that I asked the Vice President. How would you describe our fundamental relationship with China? Are we competitors, adversaries, enemies? You’ll have two minutes, uninterrupted.

PAGE:  I did not create the rules for tonight. Your campaigns agreed to the rules for tonight’s debate, with the Commission on Presidential Debates. I’m here to enforce them, which involves moving from one topic to another, giving roughly equal time to both of you, which is what I’m trying very hard to do.  I want to go ahead and move to the next topic, which is an important one, as the last topic was, and that is the Supreme Court. On Monday, the Senate Judiciary Committee is scheduled to open hearings on Amy Coney Barrett’s nomination to the supreme court. Senator Harris, you’ll be there as a member of the committee. Her confirmation would cement the Court’s conservative majority and make it likely to more abortion restrictions, even to overturning the landmark Roe v. Wade ruling. Access to abortion would then be up to the states. Vice President Pence, you’re the former governor of Indiana. If Roe v. Wade is overturned, what would you want Indiana to do? Would you want your home state to ban all abortions? You have two minutes, uninterrupted.

PAGE: Senator Harris, you are the senator from and former attorney general of California. Let me ask you a parallel question to the one I posed to the Vice President. If Roe v. Wade is overturned, what would you want California to do. Would you want your home state to enact no restrictions on access to abortion? And you have two minutes, uninterrupted.

PAGE: In March, Breonna Taylor, a 26-year-old emergency room technician in Louisville was shot and killed after police officers executing a search warrant on a narcotics investigation broke into her apartment. The police said they identified themselves. Taylor’s boyfriend said he didn’t hear them do that. He used a gun registered to him to fire a shot which wounded an officer. The officers then fired more than 20 rounds into the apartment. They say they were acting in self-defense. None of them have been indicted in connection with her death. Senator Harris, in the case of Breonna Taylor, was justice done? You have two minutes.

PAGE: Thank you, Senator Harris. Vice President Pence, let me pose the same question to you. In the case of Breonna Taylor, was justice done? You have two minutes uninterrupted.

PAGE: I’d like to pose the first — I would like you to respond first to the question on our final topic, the election itself. President Trump has several times refused to commit himself to a peaceful transfer of power after the election. If your ticket wins and President Trump refuses to accept a peaceful transfer of power, what steps would you and vice president Biden then take? What would happen next? You have two minutes.

PAGE: You know, I wrote all the questions that I asked tonight, but for the final question of the debate, I’d like to read a question that someone else wrote. The Utah Debate Commission asked students in the state to write essays about what they would like to ask you and I want to close tonight’s debate with a question posed by Brecklin Brown from Utah. She’s an eighth grader at Springview Junior High in Springview, Utah. And she wrote, quote, “When I watch the news, all I see is arguing between Democrats and Republicans. When I watch the news, all I see is citizen fighting against citizen. When I watch the news, all I see are two candidates from opposing parties trying to tear each other down. If our leaders can’t get along, how are the citizens supposed to get along?” And then she added, “Your examples could make all the difference to bring us together.” End quote. So, to each of you, in turn, I’d like you to take one minute and respond to Brecklin. Vice President Pence, you have one minute.