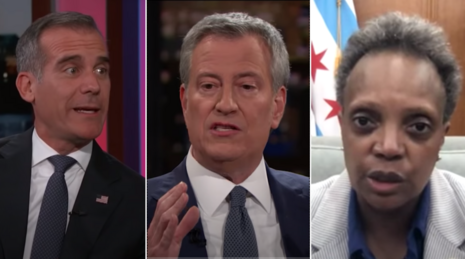 Reuters whined in a new report that “U.S. cities are underestimating their carbon dioxide emissions by an average of 18%, according to a study released on Tuesday, potentially hindering their efforts to craft effective policies to combat climate change.” But the kicker is that the big outliers Reuters claimed were underestimating their emissions were all Democrat-run cities: “Big outliers included Los Angeles, whose self-reported emissions were roughly 50% below the Vulcan readings, along with Chicago and New York, both undershooting by around 20%.”

A recap is in order: Los Angeles Mayor Eric Garcetti (D) has a webpage boasting how “Four years into the Sustainable City pLAn, Mayor Garcetti has put the city on track to a 45% reduction in greenhouse gas emissions by 2025, led L.A. to become the #1 solar city in America.” Chicago Mayor Lori Lightfoot’s (D) office gloated in a 2020 press release about the city’s alleged 15 percent drop in carbon emissions. Lightfoot had stated: “[W]e all still have a long way to go towards fully addressing the global climate crisis.” [Emphasis added.]

New York City Mayor Bill de Blasio announced the city’s own variant of the Green New Deal in 2019. De Blasio fear-mongered: “Every day we wait is a day our planet gets closer to the point of no-return. New York City’s Green New Deal meets that reality head on.”

Reuters seemed to suggest that by eco-extremist metrics, all three cities have failed by undershooting on their greenhouse gas emission estimates.

Reuters still tried to save the progressive climate change reputations of these liberal-led cities by blaming — wait for it — former President Donald Trump. Reuters stated, “Democratic mayors across the United States have ramped up their efforts to slash emissions in recent years, some claiming a desire to fill a federal leadership void left by former President Donald Trump, who downplayed climate science and supported fossil fuel development.”

JunkScience.com founder Steve Milloy told the Media Research Center that he doesn’t believe hypocritical cities when they complain about climate change. Milloy also stated that the standards Reuters used to whine about contributions to climate change by U.S. cities are also faulty:

I don’t believe the cities or the new report. There’s nothing about climate that is not error, fraud or just plain hoax. Since everything we do depends on fossil fuels, the only way for a city to reduce its emissions is to have fewer people doing fewer things. I can’t even begin to imagine how a city measures its emissions of invisible gases.

Milloy was blunt in his view of Reuters using the left’s own misguided metrics to lambast Democratic cities on their emissions. All three of these liberal cities — Los Angeles, Chicago and NYC — have also spent time lecturing the rest of the country about the need to fight climate change. Milloy stated: “It’s all so stupid, it’s hard to take seriously.”