Is CNN’s ‘Reality Check’ Attacking Fox News Based in Reality? When CNN sets up former Daily Beast editor John Avlon to uncork a so-called “Reality Check,” it’s just another opportunity for CNN to unleash DNC talking points and call themselves a “news” network.

Take Tuesday’s New Day, when anchor Alisyn Camerota set up the latest Pompadour Proclamation like this: “Senate Democrats just passed president Biden’s COVID relief bill while many Republicans are still talking about Dr. Seuss.” The words on screen were “GOP FOCUSES ON CULTURE WARS INSTEAD OF ECONOMIC RELIEF.”

Fox-canceling CNN host Brian Stelter tweeted out Avlon’s editorial with special attention to their latest study of Fox News trends: “Over the past week, according to Lexis Nexis, Fox News mentioned ‘cancel culture’ more than twice as many times as ‘Covid relief bill.'” The numbers on screen were 53 and 21.

But is this “Reality Check” real? 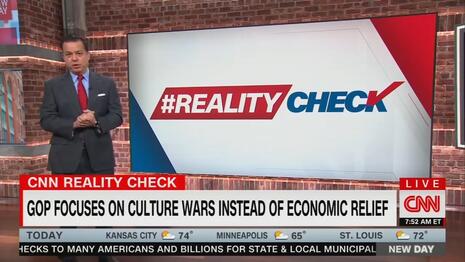 When I tried to replicate these search terms in the “Fox News Network” database from March 2 to March 8 (“the last week”), I found 26 segments with “cancel culture” and 22 with “COVID relief bill.” That’s not “twice as many.”

Then what if we removed the word “bill” from the search? There were 33 segments with the term “COVID relief.” I’m counting the number of segments with these terms. Avlon might be counting “mentions,” as if it would be surprising the words “cancel culture” might come up three times in a segment on cancel culture.

It’s also worth mentioning that the Fox transcripts in Nexis seem to be the evening schedule, from The Five to Shannon Bream. That’s not exactly the entire Fox News day.

There’s some reality-twisting elsewhere in this editorial when you test it. Avlon poor-mouthed the Trump tax cut, complaining “the bulk of its benefits went to the wealthiest Americans and corporations.” He put a Vox article on screen headlined “The Republican tax bill got worse: now the top 1% gets 83% of the gains”. But this article is from December 18, 2017, days before President Trump signed it, meaning it’s a prediction, not a measurement.

Is this a partisan claim? He doesn’t mention that the co-director of this Center is one Irwin Garfinkel, who in 2020 donated $2500 to Biden and another $1000 to the “Biden Victory Fund,” as well as $5,250 to the DNC, according to Open Secrets. The Post story also failed to mention this.