Jane is Fonda COVID. Calls it ‘God’s Gift to the Left’

Jane Fonda is the latest prophet to the Christian peoples, and her profound message proclaims that even God has had enough of Trump and has decided to send a plague as a sign of His disapproval. 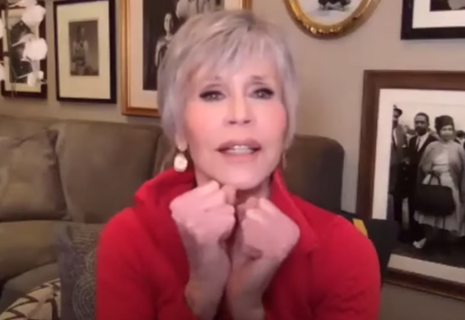 FoxNews.com detailed how Fonda wailed from the desert that “I just think COVID is God’s gift to the left. That’s a terrible thing to say. I think it was a very difficult thing to send down to us, but it has ripped the Band-Aid off who [Trump] is and what he stands for and what is being done to average people and working people in this country.”

It’s too bad Fonda didn’t speak up for the working people who were dying in Vietnam all those years ago. And if she favored the communists then, why is she now talking about God? Religion is the opium of the people, comrade Fonda! Do not deviate from the party line.

Fonda had also stated that “We are people who can help determine which way humanity goes. What a great gift, what a tremendous opportunity, we’re just so lucky, we just have to use it with every ounce of intelligence and courage and wherewithal we have.”

Yes, we’re so lucky to have free will. Yet Fonda uses it to say that God is a partisan Democrat. This isn’t the Iliad, Fonda, it’s not like God will swoop down and intervene in human affairs on a whim. He’s more interested in souls, not politics.

Fonda further said that “We can see it now, people who couldn’t see it before, you know, they see it now and we have a chance to harness that anger.”

Wow, just think of all the unbelievers weeping as they repent of their sins. God’s message delivered through Fonda has changed the hearts and minds of all those supporting Trump. The darkness that has clouded their intellect has left, and hope for the future has spread as the prophetess Fonda revealed God’s word.

Leave religious interpretations to the pastors and magisterium, Fonda, they’re actually trained for this sort of thing. And for the record, God doesn’t support any political party. Ever.