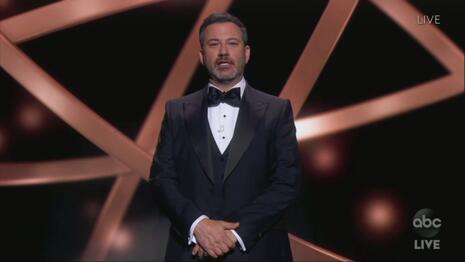 Liberal Jimmy Kimmel is the host of this year’s Emmy Awards, on ABC September 20. Considering this awards show is going on during COVID-19 shutdowns, Kimmel had a creative way of revealing that his audience wasn’t really there, which, of course, had to involve a dig at Trump and his rallies.

Not long into his opening, Kimmel segued into a joke about Oklahoma when talking about HBO’s Watchmen:

Kimmel: And speaking of blue penises, “Watchmen” has 26 nominations. It’s a superhero show, very realistic except for the part where anyone in Oklahoma is wearing a mask. Isn’t “Watchmen” also what Jerry Falwell Jr. Was into? Hey, was that me? Wait. If I’m down there, how am I up here? That would mean that no one is in the audience. That would mean that I’m up here all alone. Just like prom night. Of course I’m here all alone. Of course we don’t have an audience. This isn’t a MAGA rally, it’s the Emmys. Instead of a live audience, we took a page from baseball and filled the seats with cardboard cutouts of the nominees.

The Emmys might be different this year, but that doesn’t mean the jokes about President Trump and his supporters will stop coming. Kimmel was almost certainly referring to the rally Trump had in Tulsa, Oklahoma, on June 20. There was also an awkward joke about the scandal involving Liberty University’s Jerry Falwell Jr.

Kimmel should have been more direct in how this is not “a MAGA rally, it’s the Emmys,” and thus Kimmel and his ilk think that they’re better than the rest of those who would support the president.