Talk about high praise! Or was it the soft bigotry of low expectations?

Scarborough made his remark for purposes of contrasting Ocasio-Cortez with unhinged, bizarre conspiracy-supporting Marjorie Taylor Greene. Scarborough noted that Greene liked a tweet calling for the assassination of Nany Pelosi, and spoke of strategies for hanging Barack Obama and Hillary Clinton. That’s when Scarborough offered his backhanded compliment about AOC never having actually threatened to kill a Republican.

According to Scarborough, it was unfair of Republicans to try to attach Ocasio-Cortez’s politics to Pelosi and Biden. Scarborough cited the fact that, soon after AOC was elected, Pelosi mocked her and her Squad on 60 Minutes, saying “your caucus is like five people.” 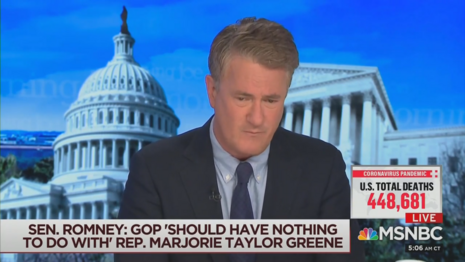 But, argued Scarborough, it is fair to stick the Republican House with Greene, since they “won’t criticize her, won’t take away her committee assignments, won’t rebuke her.”

That remains to be seen. And on the Senate side a number of Republicans have voiced forceful condemnations of Taylor Greene.

As for Democrats distancing themselves from Ocasio-Cortez, it’s true that Pelosi mocked her on a TV show. But she never stripped AOC of any committee assignments. (In 2019, Ocasio-Cortez gushed over former British Labour Leader Jeremy Corbyn. Corbyn has openly flirted with anti-Semitism. There was little outrage in the press or in the American left)

And many Democrats, and the liberal media, continue to suck up to the Westchester-raised socialist. Just yesterday, our Nicholas Fondacaro caught CBS News boosting AOC’s smear of Republicans as “abusers.”

Joe Scarborough saying that Alexandria Ocasio-Cortez has never threatened to kill a Republican was sponsored in part by Safelite.

JOE SCARBOROUGH: Let’s just be really clear, because people like to talk about Jewish space lasers and all these other crazy theories that she’s had. But let’s break this down where it actually threatens people inside Congress.

So, Willie, it’s all, you know, this House, Kevin McCarthy’s House, is legitimately, legitimately, a proper political target. You know, they — the Republicans spent an entire campaign trying to attach AOC’s politics. AOC has never, actually, threatened to kill a Republican.

But Republicans have spent the past several years attaching AOC’s politics to everybody in the Democratic party from Nancy Pelosi to Joe Biden. That’s illegitimate. It just is. I mean, because you look at the politics, you look at what Nancy Pelosi, I mean Nancy Pelosi was mocking her caucus years ago on 60 Minutes. So, so that’s actually not as accurate as Democrats who are now attaching this woman to a Republican conference who won’t criticize her, who won’t take away her committee assignments, who won’t rebuke her. Kevin McCarthy is still scared of her.