John Cleese would like an argument please. Another argument. This time, it’s about biology.

A Twitter Transtapo mob has been hounding Harry Potter author J.K. Rowling for being insufficiently woke to gender issues. But Cleese, the legendary Monty Python founder, is having none of it.

Rowling, a liberal feminist, thinks womanhood should be reserved for those who are biologically, you know, women. For that, she’s been condemned and cancelled by a long list of radical trans groups, woke entertainers and foundations.

John Cleese is decidedly not among them. On Sept. 30, he tweeted, “Dear Twits, I have added my name to the signatories of the letter in solidarity with JKRowling 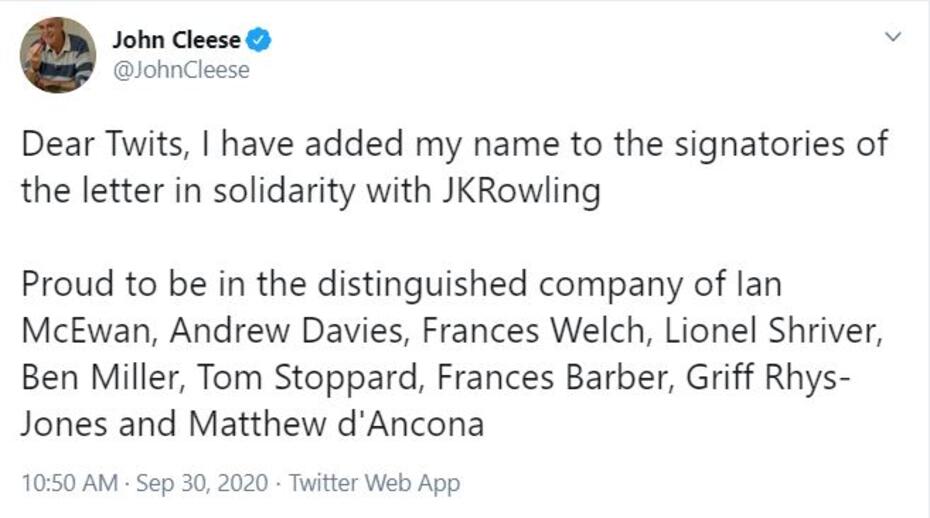 Cleese, himself a man of the left, seems to be chafing at the woke cancel culture that punishes independent thought on Twitter. Last year he ran afoul of the mob with a less than glowing assessment of multiculturalism. His Python comrade Terry Gillium has asserted that the BBC’s obsession with diversity is killing the network’s comedy offerings. Gillium went so far as saying, “I no longer want to be a white male, I don’t want to be blamed for everything wrong in the world: I tell the world now I’m a black lesbian… My name is Loretta and I’m a BLT, a black lesbian in transition.”