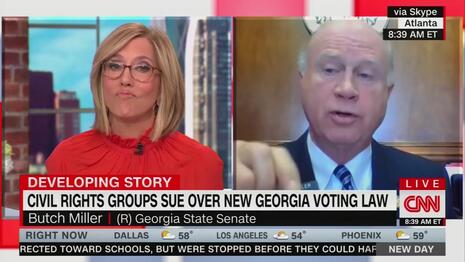 Poor CNN. For the second time this week, one of their journalists fell flat on their face while attempting to shame a Republican guest over new election laws.

On Tuesday’s New Day, co-host Alisyn Camerota confronted Georgia State Senator Butch Miller for sponsoring the new voting reform bill in his state, which aims to make elections more secure. But as she hounded him from the left with blatant lies about the legislation, the Republican was ready to fact-check.

Camerota began by whining about the “so convenient” drop-off boxes being moved back inside: “So let’s talk about — help those of us outside of Georgia understand why this law, this voting law in Georgia was necessary?”

Miller explained these drop-off boxes were only temporarily moved outside due to pandemic measures. “If you are familiar with the ballot drop boxes, you’ll know that they were not permitted or codified in Georgia law. The drop boxes were only a function of the pandemic,” he began.

Seeming to ignore his point, Camerota cut in to ask, “But wouldn’t outside be more convenient than inside?”

As Miller kept explaining how the majority of his state’s voters wanted more secure state elections, the CNN host kept at it, asking two more times if it wouldn’t “be more convenient” to keep them outside.

Camerota finally moved on to another Democrat talking point but was schooled by Miller urging her to actually “read the bill:” [“click expand”]

ALISYN CAMEROTA: Okay. Let me move on to the next one. You restrict early voting hours from 9:00 A.M. To 5:00 P.M. Isn’t that when most people are at work?

BUTCH MILLER: Well actually, we increased early voting hours by 33 hours over the entire period that early voting is available in Georgia.

CAMEROTA:  Right, but those particular hours —

MILLER: So there are a lot of details here that apparently maybe we need to review to make sure that you’re clear on. Sorry.

CAMEROTA: This is what — Senator, this is what we’re trying to do. The point is that it sounds like, with some of these things, that you are making it less convenient!

The state senator reassured her that Republicans don’t want to make voting less convenient, pointing out there was still early voting and weekend voting.

Perhaps the most embarrassing display came at the very end of the interview. The CNN journalist parroted bald-faced lies about voters being prohibited from water and food while waiting in voting lines:

CAMEROTA: Tell us why, WHY not give elderly people who are waiting for hours in line, a bottle of water?

Empty handed, Camerota complained, “[But] you already had laws on the books about electioneering, so this feels a little bit different.” Closing out the interview she said, “Thank you for coming on explain your perspective on the new law.”

“Actually I’m trying to explain the law, not my perspective,” Miller shot back as Camerota grimaced. Hey, maybe CNN should give that a try!

Despite the Georgia state senator’s rebuttal to many of the media’s lies about this new law, CNN was already lying about it again just one hour later on CNN Newsroom. Reporter Dianne Gallagher misled viewers by claiming the law makes it “so someone cannot go and give food or water to a person who is waiting in line to vote.” No, it prohibits political organizations from doing so. As Miller noted above, and Erick Erickson wrote about in his media fact-check: “Water and food will be permitted within 150 feet of a polling location provided it is set up by poll workers and is unattended by non-voters.”

CNN’s hackery was paid for by sponsors, Rapid Grass and Liberty Mutual. Contact them at the Conservatives Fight Back page here.