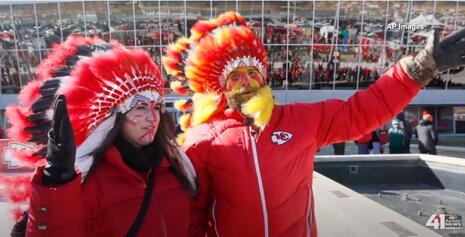 The NFL season hasn’t even begun yet, but the Kansas City Chiefs are already sanitizing Arrowhead Stadium — of Indian headdresses. It’s just another way a large U.S. organization hopes to make the public think that they, too, are out in front of the curve on addressing racial sensitivities.

As Pete Sweeney of Arrowhead Pride writes, the Chiefs’ organization released a list of priorities most likely to appease a small minority of snowflake lefties while ticking off a large fan base. At the top of the list is the alleged offensive imagery of headdresses:

All is not lost, though, Chiefs fans. Face painting is still allowed for everyone! With one little caveat. Any painting “styled in a way that references or appropriates American Indian cultures and traditions will be prohibited.”

How is appropriate style to be determined? That’s left up for debate, but as former Supreme Court Justice Potter Stewart once said of pornography, if the security people see it they’ll recognize it. They will also make the offending fans remove it outside the stadium. So now security people will be on high alert for guns, knives, explosives and improperly applied face paint.

Last season, the Chiefs introduced the “Drum Deck,” but that may have to be changed, too. KC is “exploring all options for a modified engagement moment from the Drum Deck that maintains a unifying effect between our fans and our players but better represents the spiritual significance of the drum in American Indian cultures.” This will include discussions about how the focus of the drums can be shifted to “something that symbolizes the heartbeat of the stadium.” If this language sounds like PC gobbledygook, it is.

The Chiefs also indicated that Indian religious ceremonies will continue. PC religious ceremonies, that is. They cited NFL guidelines and the city’s Health Department for the COVID-19-impacted 2020 season to say they’ll continue the Blessings of the Four Directions, the Blessing of the Drum and inviting Indian tribal members to participate in the American Indian Heritage Month game. Hey, Chiefs, what about other religious displays, i.e., the Lord’s Prayer?

The Huffington Post’s David Moye has also written about the Chiefs’ new policies. He implies that the team’s nickname is racially inappropriate and complains that the team still won’t change it.

Moye writes that the team engaged in discussions that helped “us educate ourselves and our fans,” and partnered with leaders from diverse American Indian backgrounds to come up with the new policies.

HuffPo’s story includes social media posts by people who support Kansas City’s PC changes and others blasting the team for not changing its nickname.