She’s never really been proud of her country and he’s never not been proud of himself. Or China. Now, they want to make sure people who wouldn’t show up and exercise the franchise of their own volition are enticed to vote with bread and circuses. But the only thing more unlikeable than a Michelle Obama-LeBron James political partnership partnership is the way the AP is reporting it. 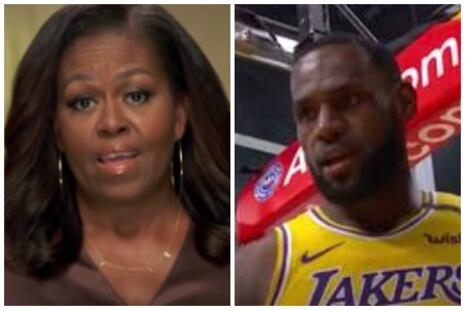 AP’s Darlene Superville writes that “Mrs. Obama’s When We All Vote and James’ More Than A Vote are teaming to provide information, transportation, food, music, personal protective equipment and other support at early voting sites around the country Oct. 18-31.”

“Personal protective equipment,” like black bike helmets, umbrellas, mace and baseball bats? I kid. I kid because we all know that Democrats abhor rioting, looting, arson, violence and mayhem. Ms. Superville is obviously referring to the masks that have done so much to keep us all safe.

“Music, celebrity appearances, personal protective equipment and support for voters’ rights from the Lawyers’ Committee for Civil Rights Under the Law and the Election Protection coalition will also be provided. Lyft has agreed to provide discounted transportation.”

To translate for those who don’t speak AP: left-wing lawyers, celebrities and Lyft will be providing in-kind contributions to help Democrats secure the “low-information voters” so prized by Mrs. Obama’s husband.

And King James, fresh off his NBA Championship with the Lakers, is now free to pursue his real interest: pretending to be a victim. The vastly wealthy idol is given to whining about “systemic racism” and “oppression.” His group has offered to pay fines and fees to get felons to cast their ballots.

So AP is giving free publicity to a get-out-the-vote campaign run by wealthy Democrats. At this point, it’s not even news.