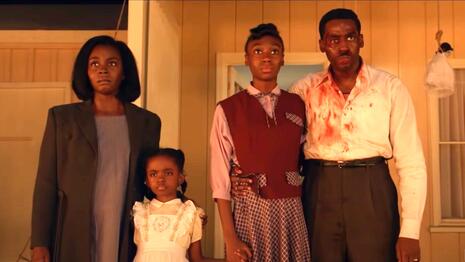 “I can certainly understand the negative reaction, and why viewers found the violence a bit excessive. Have we seen this kind of terrorization of other races on TV? People recognize there is a need and necessity to tell difficult stories, to interrogate the sickness of this infrastructure of white supremacy. But people are also asking, ‘at what cost?’”

It’s fascinating how shows like Them, Watchmen, and Lovecraft Country, which go to great lengths to show how America, white people, and just about everything associated with them are virulently racist, are still condemned by the woke media.

Them creator Little Marvin defended the fictional brutal violence as “designed to convey the savagery of racism” and others argued that “the pain of racism should not be sugarcoated.” Unfortunately, they all still seem to share one idea: that a white supremacist America essentially tortures black people regularly.

Marvin and the other showrunners claim the objectionable violence in their shows represents how common barbaric, racist attacks against black people are and Braxton maintained that this brutality is appalling precisely because it’s so common. He even quoted another “expert” about how the material is, in fact, “triggering” due to referencing real-life racism.

“For white audiences, these projects offer an opportunity to see things they may not see on a regular basis, while for Black folks, it’s the same old, same old. People are really sensitive and raw about the graphicness of the violence because, for them, it’s not entertainment…These directors and screenwriters are working in a world of fantasy. But the irony for Black folks is that it’s not a far cry from that fantastic world to the reality of how we live our lives. I can understand why they might want to push that away.”

While we could all live with less brutality and violence in our fantasy, it’s also important to remember reality. White people brutalizing black people for fun is most certainly a “far cry” from how most black people live their lives, and statistics can prove that. These shows, especially the ones that take place decades in the past, do not represent anything that’s really happening in the year of our Lord 2021.

If people really want to call out these shows for their violence, I won’t stop them. After all, fewer shows with gratuitous violence would only make television better. However, TV won’t really improve until we get rid of this racial nonsense once and for all. Just don’t expect the Los Angeles Times to support it.