I am forever indebted to the anonymous Trump supporter that had a crate of desk calendars shipped to the White House. Knowing what day it is in that turbulent environment is always a plus, but this donor went the extra mile and evidently took time to circle election day in red. 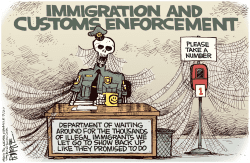 Let’s take immigration, the premier issue that powered the Trump victory. With the exception of a few executive orders, appointees in the executive branch did almost nothing. The Department of Justice is a prime example.

Attorney General Sleepy Jeff Sessions recuses himself from the Russia Collusion Delusion, and was evidently convinced he couldn’t get involved with any investigation that involved foreigners.

It was open borders, open season until the calendars dropped.

Now Mark Krikorian, writing in the National Review, finds a crackdown, that if it continues, could finally begin to reverse the flow of this human river.

Immigration & Customs Enforcement “has just announced the first indictments against managers at some of the Mississippi chicken plants [raided one year ago]. Four people at two of the plants have been charged with a variety of crimes, including harboring illegal aliens, wire fraud, identity theft, and more. All four could potentially spend the rest of their lives in prison.”

This is important because the cost of illegal immigration is transferred to the people and companies benefiting from luring illegals across the border.

The Meat Mafia looks at aiding and abetting illegals on a cost–benefit basis. And currently the benefits of conspiring and hiring illegals far outweigh the minimal cost. First, when you import your labor from Tijuana you also import Tijuana’s wage scale. Employee benefits are picked up by the surrounding community, at practically no cost to the company. Emergency rooms function as health insurance. Taxpayers foot the bill for education, breakfast and lunch. And Walmart is always bilingual.

These involuntary subsidies extorted from the surrounding community make hiring illegals easy to justify to upper management. The only additional cost is campaign contributions to state and federal politicians so as to keep enforcement confined to the occasional 7/11 parking lot.

These Mississippi indictments change the calculus and start shifting the burden to those causing the problem. Krikorian believes it took a year for the indictments because of the complexities of the case and the difficulty of proving the executive suite “knowingly” knew of the hiring policies. “Tysons was acquitted in a 2003 case because, while the lower- level managers were indisputably guilty, top corporate management had enough buffers between it and the button men in the field that it was able to beat the rap.”

I’m sure management jefes just assumed the overwhelming predominance of Spanish spoken on the production line was just a function of the growing popularity of soccer in the US.

Here’s a suggestion that would speed prosecutions and really make hiring illegals too expensive for the Meat Mafia. What other criminal organization uses buffers and winks–and–nods to shield the bosses from the underlings? If you said the Mafia, you win. So why not use the law that broke that criminal organization to break these corporate criminals?

As Wikipedia explains, “indictments under the Racketeer Influenced and Corrupt Organizations (RICO) Act allows the leaders of a syndicate to be tried for the crimes they ordered others to do or assisted them in doing, closing a perceived loophole that allowed a person who instructed someone else to, for example, murder, to be exempt from the trial because they did not actually commit the crime personally.”

It’s no exaggeration to compare the Meat Mafia to the real Mafia. Indictments at the Agriprocessors beef plant included, “a variety of crimes, including harboring illegal aliens, child labor, ID theft, document fraud, bank fraud, mail fraud, money laundering, and more.” These employers are a criminal conspiracy that deserves prosecution under conspiracy law.

Even better, RICO allows for civil suits against the organization from others damaged by its criminal actions. Hospitals suing for unpaid medical bills, relatives suing for loved ones killed by drunk–driving illegals and school districts suing for over–burdened classrooms would quickly make the cost of hiring illegals to be prohibitively expensive.

And there is the prison time.

These crackdowns work. Tyson’s, even with the buffers that allowed it to beat the rap in 2003, got the message. It’s been investing heavily in automating the production line, something that wasn’t necessary under the Juan Crow regime that imported cheap, illegal Latin American labor.