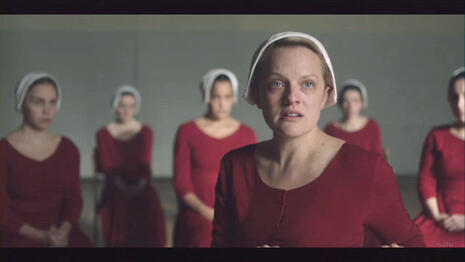 As Judge Amy Coney Barrett is rumored to be one of President Trump’s likely nominees to replace recently departed Supreme Court Justice Ruth Bader Ginsburg, the liberal media are in overdrive trying to tear her down and ruin her path to the nomination.

Since they won’t be able to fabricate last minute hazy allegations of drunken teenaged groping against a female candidate, the liberal media are instead going on the attack against Barrett’s religion, trying to portray the devout Catholic mother of seven as belonging to some kind of religious extremist cult a la the evil theocracy in Margaret Atwood’s dystopian The Handmaid’s Tale. Literally.

On Monday, a Newsweek article by Khaleda Rahman breathlessly hyped “How Amy Coney Barrett’s People of Praise group inspired ‘The Handmaid’s Tale‘” only to soon after append a correction all the way at the end reading:

Correction: This article’s headline originally stated that People of Praise inspired ‘The Handmaid’s Tale’. The book’s author, Margaret Atwood, has never specifically mentioned the group as being the inspiration for her work. A New Yorker profile of the author from 2017 mentions a newspaper clipping as part of her research for the book of a different charismatic Catholic group, People of Hope. Newsweek regrets the error.

Oops. No matter. Newsweek tweaked the headline to “How Charismatic Catholic groups like Amy Coney Barrett’s People of Praise inspired ‘The Handmaid’s Tale’” and edited the opening sentence to read that Barrett “is affiliated with a type of Christian religious group that served as inspiration for Margaret Atwood’s dystopian novel, The Handmaid’s Tale.” Why retract a wrong article when you can simply imply its original intention and provide fodder for Barrett’s detractors? MSN.com still has the article posted as originally written.

(By the way, a 2017 NJ.com article said that People of Hope couldn’t have been the inspiration for Atwood’s book either because the article about it came out after the book had been published – H/T Washington Examiner.)

The next day, Reuters’ Daniel Trotta dutifully jumped on the story with the title “Handmaid’s Tale? U.S. Supreme Court candidate’s religious community under scrutiny,” but this article, too, had to be walked back and rewritten, as DC Examiner’s Jerry Dunleavy pointed out. The new title was tempered to “As U.S. Supreme Court nomination looms, a religious community draws fresh interest” and the charge from the original opening sentence was removed: “Some have likened People of Praise… to the totalitarian, male-dominated society of Margaret Atwood’s novel ‘The Handmaid’s Tale.’”

But that didn’t stop others from piling on and turning it into an anti-Catholic hate-fest. Most obnoxious was – who else? – Wonkette which asked, “Is Amy Coney Barrett’s Catholic Jesus Batsh*t Cult Literally ‘The Handmaid’s Tale’?”

We don’t know if Donald Trump is going to nominate Amy Coney Barrett, who is literally batshit, to stinky up the seat of Ruth Bader Ginsburg, one of the greatest justices to ever sit on the Supreme Court. But if he does, all the Handmaid’s Tale jokes will officially be too real.

… Coney Barrett is the insane kind of Catholic. She has stated publicly that “life begins at conception,” which is funny if you know anything about science and how well that fertilized egg survives in the wild if it fails to implant.

Actually, Wonkette, science is real and it is settled: 95% of biologists agree human life begins at fertilization. And, please, tell me more about the different kinds of Catholics and which you find insane.

The crass and immature smears continued:

Before Trump nominated Coney Barrett to the Seventh Circuit, she had never been a judge before. Sure, why not put that fucking idiot on the Supreme Court? (Because she’s only 48 and could potentially skullfuck America for 50 years if confirmed.)

Oh yeah, and this dumbass is also a longstanding member of the same type of Catholic Jesus club that was literally the inspiration for The Handmaid’s Tale.

Lots of class over at Wonkette, eh? Of course, it doesn’t matter to Wonkette that Newsweek got it wrong because “People of PRAISE sounds batshit enough.”

This is only a small taste of what the next few weeks will be like for whomever President Trump announces as his SCOTUS pick as Democrats and their handmaids in the media wail and gnash their teeth to block the nomination at all costs. Get ready.