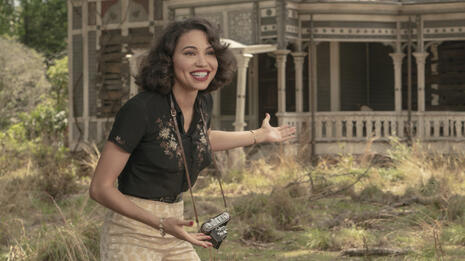 The August 30 episode “Holy Ghost” follows Leti (Jurnee Smollett) as she purchases a house in a predominantly white North Side neighborhood of Chicago. Unfortunately for her, every white person in the 1950s is apparently a racist thug. The white neighbors burn a cross in her front lawn, harass her with their car horns, and at one point even break into her house for a potential beating.

Even the white cops are against her as they predictably arrest her for fighting back rather than discipline her neighbors. To prove their hatred, they toss her around their squad car as she’s helplessly handcuffed.

Captain: Letitia Lewis. You have quite a record here. What group you with? The Monkey Urban League? No, wait, I know. The National Association for the Advancement of Cockroaches. I’ve gotten a lot of complaints from your neighbors about you.

Leti: Have you gotten the 21 reports I’ve filed about harassment from those same neighbors?

Captain: Burke, Crane, have we received any complaints?

Crane: Not that we can recall, Captain.

If the scene above seems “familiar,” then it’s likely on purpose. Several viewers on Twitter as well as a couple of TV reviewers were quick to remark on the similarities between this interaction and the death of Freddie Gray. After all, both involved an arrested black suspect being erratically thrown around the back seat of a police car. Of course, the show neglects the fact that half of the cops involved around Freddie Gray’s death were minorities as well as the fact that there was little to no evidence that concluded the officers deliberately harmed Gray. Sadly, as the recent riots proved, people never let facts get in the way of a good racial narrative.

Damn they doing the same thing they did to Freddie Gray. #LovecraftCountry

The entire show is essentially a racial narrative in itself where the monsters seem to always be racist white men. Again, the 1950s were a difficult time for many black citizens, and some of the harshest actions in this show were indeed based on real events. However, the series is determined to link these things to the present at all costs. Whether it’s by having anachronistic song cues or discussing representation in pulp fiction novels, we’re supposed to act like the actions in fictional 1955 have any bearings in real-world 2020.

As usual, leftists seem more comfortable in fantasy than in the real world. Either way, they can’t help but hate white people in both.