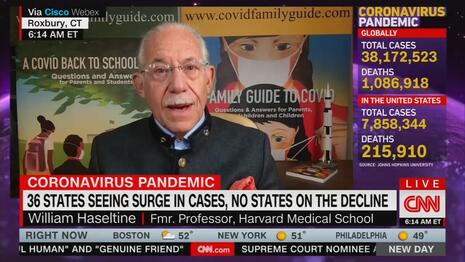 CNN seems happiest when it can accuse the president of not merely being reckless with the coronavirus response, but being guilty of “mass murder.”

The president has tweeted in favor of more reopening of states. Yahoo News reported White House aides cited something called the Great Barrington Declaration, which states “The most compassionate approach that balances the risks and benefits of reaching herd immunity.” Yahoo cautioned that “It is unclear how far Trump and his administration will go to push states to adopt a herd immunity approach to the virus.”

But on Wednesday morning’s New Day, they brought on former Harvard professor Dr. William Haseltine to drop rhetorical bombs. What provoked the prof was the possibility the prez might be adopting some form of “herd immunity” approach to the pandemic. It’s something that the president’s science adviser, Dr. Scott Atlas, has been suggesting.

According to Haseltine, adopting the herd immunity approach would cost nothing short of two to six million American deaths . . . every year!

Of course, that ignores the realistic prospect that by June or so, an effective vaccine will be widely available. It also flies in the face of the New York Times [!] report that “Experts are saying, with genuine confidence, that the pandemic in the United States will be over far sooner than they expected, possibly by the middle of next year. “

In that light, the prof’s prediction of 2-6 million American deaths every year seems wildly pessimistic. But the left will never overlook an opportunity to cast President Trump in the worst possible light. Indeed, even before the pandemic hit, our Nicholas Fondacaro noted a guest on Brian Stelter’s CNN show claiming that [emphasis added]:

Trump is as destructive a person in this century as Hitler, Stalin, and Mao were in the last century. He may be responsible for many more million deaths than they were.

Dr. Haseltine is going to have to up his game if he’s going to catch up with that!

PS: Haseltine is also chairman of something called the U.S.-China Health Summit. He asked in February about Chinese-U.S. cooperation and he proclaimed then “You know, in times of epidemic, there are two things that can stand in the way of success. One of those things is politics and the second is trying to put a human face onto a natural disaster. No one is to blame for this outbreak. It is like trying to blame someone for a volcano or a tsunami.”

CNN’s guest claiming that President Trump’s adoption of a herd immunity approach to the coronavirus would constitute “mass murder” was sponsored in part by Google and Liberty Mutual.

WILLIAM HASELTINE: I’m extremely concerned that the president is being advised by people who speak of herd immunity. Herd immunity is another word for mass murder. That is exactly what it is. If you allow this virus to spread, as they are advocating, we are looking at to 2 to 6 million Americans dead. Not just this year, but every year.

JOHN BERMAN: I want to make sure people understand. What has changed over the last few days is that the White House now seems to be explicitly endorsing the concept of herd immunity. There was a background phone call, White House officials who didn’t want to be named, they supported this document from this think tank that Alisyn was talking about, that says we need to let young people get infected.

HASELTINE: It was implicit in many of the policies. The states were being given instructions by the White House not to enforce rules against bars. Not to make masks mandatory. That was implicit. Explicit is another thing. Explicit is close to promoting death amongst our fellow countrymen. As I say, this means the policy that seems to being followed now is to have 2 to 6 million Americans die this year and next year and the year after.