Multiple outlets accused Bannon of calling for the beheading of political figures after he made an allusion to the trial and execution of St. Thomas More in his “War Room: Pandemic” podcast. The left and the news media misinterpreted and condemned it as a call for violence. Zuckerberg was unconvinced. “We have specific rules around how many times you need to violate certain policies before we will deactivate your account completely,” Zuckerberg commented at an all-staff meeting, according to a Nov. 12 Reuters report. “While the offenses here, I think, came close to crossing that line, they clearly did not cross the line.” 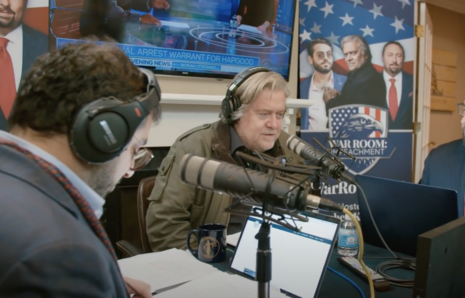 Reuters claimed that Bannon had somehow “urged the beheading of two senior U.S. officials.” CNBC made a similar charge, alleging: “Bannon suggested in a video last week that FBI Director Christopher Wray and government infectious diseases expert Anthony Fauci should be beheaded, saying they had been disloyal to U.S. President Donald Trump, who last week lost his re-election bid.” The Guardian declared that Bannon had “called for the beheading of two US officials and the posting of their heads outside the White House as a ‘warning’.”

“A Bannon spokeswoman said his comments were ‘clearly meant metaphorically’ and alluded to a reference Bannon had made the day prior to the treason trial of Thomas More in Tudor England ‘for rhetorical purposes.’

“‘Mr. Bannon did not, would not and has never called for violence of any kind,’ the spokeswoman, Alexandra Preate, said in a statement.”

A Bannon spokesperson told CNBC that Bannon has a clear history of asking for institutional change and not explicitly calling for literal violence:

“Mr. Bannon has been openly critical of FBI Director Chris Wray for weeks and has called for his firing for his failure to investigate and address Hunter Biden’s hard drive and that has been in Director Wray’s possession since in Dec 2019. In addition, Mr. Bannon has supported comments from the White House calling for the immediate firing of Dr. Fauci.”

Despite the clearly non-violent context of Bannon’s rhetoric, actual Democratic operatives have joined the media in taking swings at Facebook allowing conservative rhetoric.

Biden staffer Bill Russo accused Facebook of “shredding the fabric of our democracy” in an thread slamming the platform for giving conservatives a voice.

Russo condemned Bannon specifically, tweeting: “Steve Bannon literally called for the beheading of FBI Director Wray and Dr. Fauci in a video on November 3. It was live on Facebook for 10 hours before it was removed after a journalist inquired about the video.” Later in that same tweet, Russo lamented: “[Bannon’s] page is still live on Facebook.”