With one single solitary exception, the social justice warriors of the National Football League got cold knees Thursday night. The visiting Houston Texans hid in their locker room during the playing of the Star Spangled Banner and the Black anthem, Lift Every Voice. One member of the home-standing Chiefs, Alex Okafor, kneeled during the national anthem, and that was it. Somewhere Colin Kaepernick was watching the cold knees of the Chiefs players who stood upright and likely muttering something under his breath about cowardice.

Expecting mass kneeling like they’ve seen recently in the NBA and MLB, the attending fans and television viewers were denied the opportunity to vent on both sets of SJWs. Those people who bought tickets to see the expected SJW spectacle in person let ’em have it when the Texans arrived and both teams linked arms for a moment of unity.

Across the nation, the number of fans watching the NFL season opener on the tube was down, way, way down. In a 10-year low, television viewership also dropped 16.1 percent compared to 2019.

There was another strange thing about this game. The entertainers were spared critical review by the media, some of whom instead directed criticism at the fans. Pete Grathoff of The Kansas City Star wrote about how NFL fans and reporters were disgusted by the booing.

The “most polarizing moment” of the night came when Chiefs fans could be heard booing during the moment of unity, Grathoff wrote. His short story was heavily padded with numerous social media criticisms of the fans, most notably from Sarah Spain of ESPN: 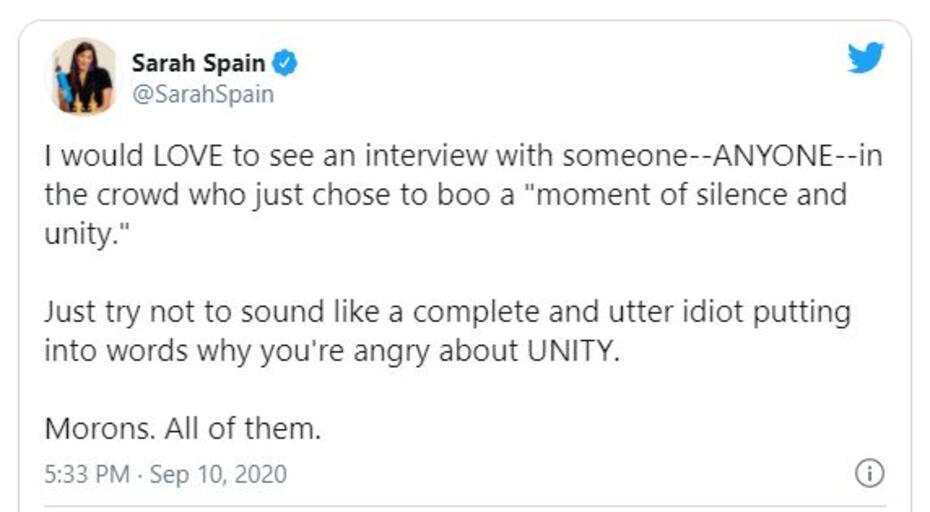 Howard Bryant, a race-baiting author associated with ESPN who goes by the nickname “Full Dissident,” tweeted: “You boo a moment of unity 1) when there’s no unity, and 2) when you want to make it clear you don’t want unity.”

Among the other selectively chosen social media snipers included a man who wrote, “To the fans that boo’d the Moment of Unity between the Texans and the Chiefs guess what You’re the problem.” Another person called the fans immature.

The only tweet posted in the Star story expressing an alternative opinion came from David Hookstead, a reporter for The Daily Caller who mentioned that fans hate politics in sports: 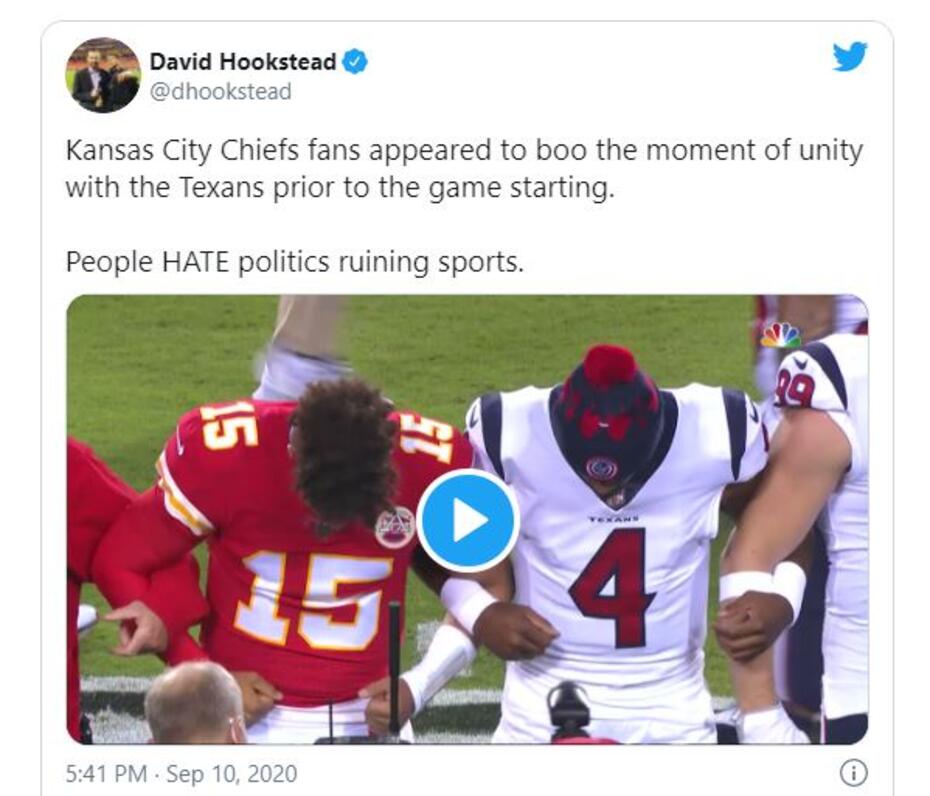 Now the rest of the story. During the moment of unity, the jumbotrons displayed a Black Lives Matter slogan. Contrary to the near-sighted folks quoted above, fans were booing the whole social justice package enveloping the NFL, and for that matter, pretty much all of professional sports. As Outkick’s Jason Whitlock wrote, the fans were booing the toxic and divisive BLM — not unity.

So the war is on between SJW suck-up media and football fans. We’re only toe-deep into the 2020 NFL season, and with 13 more games ahead Sunday and two on Monday, the NFL, its owners, television networks and their advertisers should be very nervous. A 10-year viewership low and 16-percent ratings tumble tend to do that. If they’re smart, they’ll re-think the social media messages in the end zones and on the players’ helmets. Maybe they’ll wise up and get the focus back on a novel priority, like football.