And you thought President Trump was sick? To see real sickness on display, check out today’s Morning Joe, where Joe Scarborough and Mika Brzezinski were in total meltdown mode. Triggering them was the brief ride President Trump took yesterday outside Walter Reed hospital to greet and thank well-wishers.

That sent Joe and Mika into hyperbolic paroxysms, with Brzezinski actually claiming to see the potential “implosion of the presidency of the United States.” And Scarborough seeing nothing less than a rejection of the Age of Enlightenment!

These people aren’t having any of the fun they had over conservative Rep. Louis Gohmert contracting the coronavirus. Scarborough said “It really shocks the conscience!”

Joe and Mika’s fever-brained reaction was largely based on the lamentations of a Walter Reed doctor, James P. Phillips, who condemned Trump’s ride, saying it unnecessarily put at risk the accompanying Secret Service agents.

But in relying on Phillips, Morning Joe ignored two things: 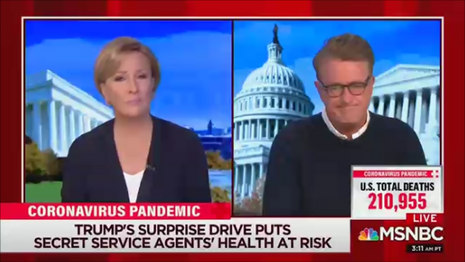 JOE SCARBOROUGH: You look at those pictures, and it really shocks the conscience. And as a Walter Reed doctor said, it was absolutely staggering that this was allowed: “Every single person in the vehicle during that completely unnecessary presidential ‘drive-by’ just now,” the doctor goes on, “has to be quarantined for 14 days. They might get sick. They may die. For political theater. Commanded by Trump to put their lives at risk for political theater. This is insanity.”

MIKA BRZEZINSKI: And this is not surprising. And at the same time, it’s an implosion, potentially, of the presidency of the United States.

This drive, this one drive, really neatly encapsulates the recklessness, and the denialism, and the anti-medicine position, that this president and his party have embraced as 200,000-plus people have died.