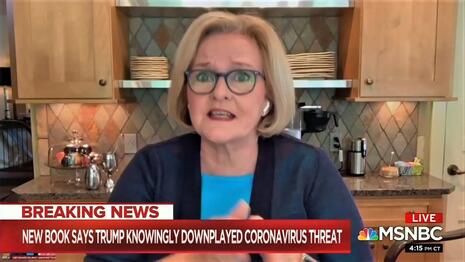 For many months the leftist media implied Trump took an authoritarian approach to journalists, and yet none of them were put in jail. Jim Acosta was put on a “time out” at the White House. In reality, Trump has granted great access to the press, despite their partisan and ideological animus.

So now, after he granted access to Washington Post “legend” Bob Woodward, he’s an idiot for talking to journalists. That’s an interesting stance for a “news” network to take, but on Wednesday’s Deadline: White House, former senator and MSNBC analyst Claire McCaskill almost screamed he was the “stupidest president” ever for talking to Woodward, on tape.

Host Nicolle Wallace turned to her own experience: “Woodward wrote four books about the Bush White House in the years after 9/11, and like three and three quarter of them were brutal and unsparing, and yet Trump sat for 18 hours of interviews….How do you think that hobbles Trump and how do you think, how many days until he starts attacking Woodward for recording him?”

Hours, joked journalist John Heilemann. He said all Trump’s usual defenses that the quotes are fake are gone. “They’re all stripped away and all that’s left is the sound of Trump’s own voice captured by Woodward in an act of, and I will say the irony is rich, in an act of Trumpian narcissism. One of the greatest acts of Trumpian narcissism I’ve ever seen. Someone who got pillaged in the earlier Woodward book and thought that I can charm that guy. I can turn it around. That first book was tough on me. This next book, I’m going to get on the phone with Woodward I’m going to have 18 conversations with him and when I’m done, Woodward’s going to be on my side, and that was folly. Utter folly.”

No Republican should expect The Washington Post to be on his side. Note taken. Then came McCaskill’s rant:

CLAIRE McCASKILL:  I was just going to say I wanted to follow up a little on what John just said I would you know think about this for a minute. Let’s dwell on this just for a second. he’s obviously never read a Woodward book. He doesn’t understand what Woodward books are and so, is, that’s strike one. Strike two, is he sits for 18 interviews. Okay, who in their right mind who’s running for office in a year within the year, sits for 18 interviews with a journalist? This is not a smart thing to do!

McCASKILL: This is beyond folly. This is ultimate stupidity. He is so stupid and he knows — He did the last interview like a month ago. He did the last interview a month ago, so when is the book coming out? The book is coming out within two months of his election. With tapes. 18 hours of tapes! Hours and hours of tapes! So this president is the stupidest president that’s ever held the office!

So, to review: Trump is stupid to grant all his interviews to Sean Hannity and Fox. And now he’s stupid to grant interviews to Bob Woodward. These leftists will criticize the president no matter which decision or direction he takes. The only consistency they show is that they always want Trump defeated, removed, finished.