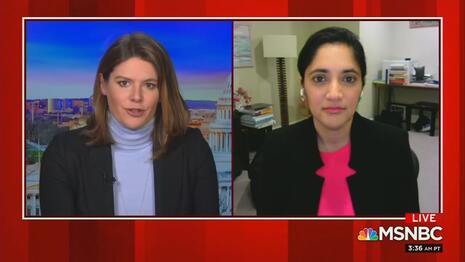 On Tuesday’s Morning Joe, MSNBC fill-in hosts Jonathan Lemire and Kasie Hunt conspired with medical contributor and former Obama official Dr. Kavita Patel and Princeton professor Eddie Glaude Jr. to attack the Trump administration for the COVID vaccine rollout and Americans for gathering with their loved ones on Christmas. Patel complained that the vaccine rollout is not fast enough and called it “a total abdication of federal strategy” and nastily declared that Americans celebrating the holidays with their loved ones “will lead to somebody dying.”

Lemire began the segment by expressing frustration that people are traveling to celebrate Christmas with their families and friends “despite the warnings” from the authorities: “Despite the warnings from health experts like yourself, from government officials, from governors who are saying, look, this is — we know it’s the holidays, we know it’s Christmas, we know you want to be with your family, but this is the one year to sit this out. It seems like at least a lot of Americans didn’t listen to that advice.”

EDDIE GLAUDE JR.: You know, I mean, look incompetence, gross negligence, we have — we have seen it all in this — in this regard. And I want to ask Dr. Patel, I want to go back to the surge upon a surge conversation. I mean, we just had this — you know, this horrifying data come out — come at us about one in 17 Americans have been infected with the virus, one in 1,000 have died. And yet, we still see the surge in numbers of folks traveling over the holidays. You see these TikTok videos of — of folks surprising their parents or their — or their loved ones by showing up. I know this is a terrible question to ask you, but I have to ask you. What do we need to do in terms of public messaging in order to bring home, right, the deadly effects of this virus. That the vaccine is the — is the sun at the end of the tunnel but — the light at the end of the tunnel but we still have to go through this really, really dark time. What would you suggest to our leaders, to the Biden administration, that we need to be saying to the American public about what we’ve — what we’re about to face in this moment?

PATEL: Yeah, that’s a great question. By the way, it’s a question that’s haunted me for the last ten months because it does feel like we’re failing. I as a doctor, we as public health professionals, we’re failing. People don’t listen anymore and despite thinking about how the deaths should be enough to scare people, it’s not working. And Eddie, it reminds me of past kind of public health campaigns, you know, in the Reagan era, you know, telling people to just say no. Obviously that didn’t work. So what we really need to do is try to appeal. Americans clearly do — do not like to feel their freedom is inhibited despite this being a public health emergency where freedom doesn’t necessarily mean that you can be healthy.

So I think Eddie, the most important thing the Biden-Harris administration can do is realize that Americans want choices, but their choice needs to be clear that if they make certain choices like those TikTok videos, that will lead to somebody dying because that’s 1000 people. That’s your high school graduation class, that’s your church, and if — and if that’s not incredibly crystal-clear in the local context, then people are just going to continue to go on about their merry ways and believe a lot of the myths and false information that in fact the Trump administration has been propagating.

Just maybe “Americans didn’t listen” because those same “experts,” “officials,” and “governors” have not even listened to their own “warnings.” Gavin Newsom, California’s onerous Democratic governor, violated his own mandates at a large indoor dinner with some of California’s leading health officials. Austin Texas’s Democratic mayor Steve Adler sent a video from Mexico telling the people of Austin not to travel. Over a thousand public health experts signed a letter saying that Black Lives Matter protests should not be shut down due to COVID concerns, despite previously condemning lockdown protests. These are just a few examples of many. The media has tried to downplay such instances, so it is no wonder that Americans do not trust “the warnings.”

MSNBC hates Trump so much that it will not give him credit for anything. It mocked him for his guarantee that the vaccine would arrive by the end of 2020 and now is criticizing him for not distributing the vaccine quickly enough.

This hatred for families celebrating Christmas was sponsored by Sleep Number and Western Governors University. Let them here what you think about them sponsoring this content.