MSNBC: The System Is ‘Designed’ to Put Minorities ‘At High Risk of Being Killed’ “The problem that we have here is that the system is working the way it’s designed to work. Which puts black people, which puts Latinos, which puts Native Americans at very high risk of being killed.”

So the system is “designed” to endanger minority lives? A reprehensible accusation on Wiley’s part.

But then things took that surprising turn. Citing a lengthy New York Times investigative article, and speaking in his own right, Joe Scarborough made a thorough and convincing case that the warrant for police to enter Taylor’s house was justified! 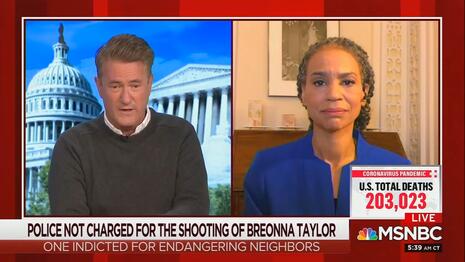 That set Wiley back on her heels. Responding to Scarborough’s question as to whether the Southern District of New York judges she worked before would have issued the warrant in light of the extensive evidence, she hedged: “it’s an important question.”

Note: Wiley had been an MSNBC contributor, but resigned in July after announcing that she is exploring a run for mayor of NYC. She had served as the Chair of De Blasio’s Civilian Complaint Review Board. The New York Times article on her MSNBC resignation and possible mayoral run said she: “could distinguish herself as a top-tier candidate by focusing on race and criminal justice issues.” So her hard line here is apparently part of that strategy.

Maya Wiley’s accusation that the system is “designed” to put people of color “at very high risk of being killed” was sponsored in part by Chevrolet, and Dunkin’ Donuts.

So they create a situation in which, by any means necessary, they can go after people who are black, and it doesn’t matter what their Fourth Amendment rights are. And that’s what we have to fix.

JOE SCARBOROUGH: So, Maya, let me ask you this question. This is from a New York Times article, an investigative piece. And I’m quoting it here. Judge Mary Shaw, who signed the order said she had asked needed questions of the officers, reviewed affidavits, prepared each warrant, and subsequently made the probable cause determination required by law. The warrant cited five pieces of information establishing what the police said was probable cause. Mr. Glover’s car making trips between the trap house where the drugs were and Mrs. Taylor’s home. Her car’s appearance in front of 2424 Elliott, that house, on multiple occasions. Surveillance of footage of him leaving her apartment with a package in mid-January. A postal inspector’s confirmation that Mr. Glover had used her address to receive parcels. And database searches indicating that as late as February, he listed her apartment as a home address.

And of course, it was a very extensive, very extensive, surveillance operation and drug operation for some time, and when they went into the three other houses they were looking at, they, in fact — let me read from the Times again, they did, in fact, find — the swarm of officers beat down the doors, and without incident recovering large quantities of crack and fentanyl pills, and a bag hidden in a tree, as well as cash, digital scales, and guns. They also found signs of attempts to get rid of the evidence. Cocaine flushed in the toilet Mr. Glover, according to evidence logs and summaries. Mr. Glover and four others were arrested and taken to jail.

I’m curious, because it seems to me that, based on the judge’s and nothing compared to the number of judges you worked before, but most judges I went before in my limited time in courts would have probably signed probable cause warrants for these police officers to go to the — to go to this house, given, also, they had recordings between Breonna Taylor’s boyfriend and her.

So do you think the probable cause warrant was improperly signed over to the police officers? Do you think that the judges that you worked before in the Southern district of New York would have signed such warrants and found probable cause in this case?

WILEY: Yeah, your, an important question. Because the issue is how easy is it to get a warrant? And what the officers told the judge and to what extent did it justify this. Remember that it started as a no-knock warrant, and then because she had no criminal record, because there were real questions here, they actually changed it to a knock-and-announce. That tells you something. It also tells us that we need to know more.