Even CNN’s Don Lemon has realized that the violence in the streets is hurting Joe Biden. So now, the left is engaging in some blatant blame shifting. Violence? It’s the whites, the cops, and of course, President Trump!

Take MSNBC contributor Jason Johnson on Nicolle Wallace’s show this afternoon. Johnson claimed that “most violence” is “coming from the police,” along with a variety of white groups. And President Trump “encourages their behavior.”

Who you gonna believe? Jason Johnson, or your lying eyes?

Note that Johnson has a history of making ugly, inflammatory remarks. Even MSNBC had to suspend him for months after he claimed that Bernie Sanders was supported by “racist white liberals” and “misfit black girls.” And who welcomed Johnson back with open arms, promising she’d “be calling on him ‘early and often’ throughout the election”? You guessed it: Nicolle Wallace.

MSNBC contributor Jason Johnson’s attempt to shift the blame for the violence in the streets to the police, whites, and President Trump was sponsored in part by Jeep. 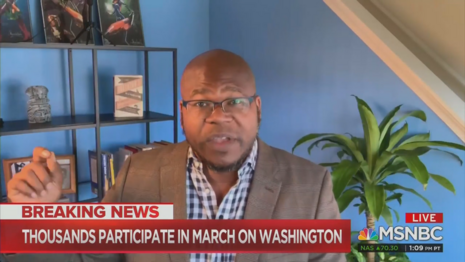 JASON JOHNSON: And when it comes to the lack of law and order that we have on the streets, what has finally come out in these last couple of months, what we saw in Minneapolis, what we’ve seen in Chicago, what we’ve seen in Portland, is the violence is often not just coming from the police, but from Proud Boys and Boogaloos, and white nationalists, and alt-right people who are coming there and destroying buildings and setting things on fire and handing out bricks.

I think it’s become abundantly clear that when you’re looking at who is causing the most violence in these situations? It’s not the mamas and the papas and the teenagers and the college kids who are coming out with signs. They go home by 9:00 at night when the curfews comes in.

It is these white nationalists and provocateurs that have been causing violence, and Trump, rather than doing something about that, essentially encourages their behavior, and never holds the accountable, who are basically hand-in-hand with that kind of violence and destruction.