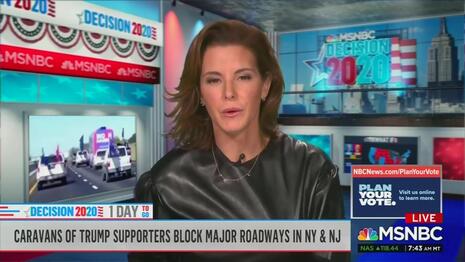 Just like in 2016, MSNBC has encouraged left-wing violence leading up to the election, spinning it as “mostly peaceful.” But in a pitiful attempt to cover up this terrible reminder, MSNBC spent this morning whining that the real threat Americans face this election is violence from the right.

On MSNBC Live Monday, host Stephanie Ruhle repeatedly asked her pro-Biden guests to back up her fears that Trump supporters were going to be intimidating voters and rioting in the streets if Joe Biden wins.

To Democratic Governor of New Jersey Phil Murphy, Ruhle worried about voter intimidation at polling stations. After Murphy dismissed that as an unlikely possibility, Ruhle was irate, demanding to know, “Why don’t you expect intimidation?” Ruhle clearly meant violence from the right because she immediately touted how a Trump caravan caused traffic on a highway in New Jersey over the weekend as an example of violent, voter intimidation (that wasn’t):

Just look at yesterday. On the Garden State Parkway over the weekend, President Trump supporters blocked half the parkway. There wasn’t any real violence, but it was certainly disruptive and certainly put a tax on this state and it easily could have gotten violent!

Yet again, Ruhle touted there would be violence from the right this week while speaking with another Democrat, former Obama Press Secretary, Robert Gibbs. Gibbs complained Trump was on the verge of telling his supporters to be violent if he declares victory tomorrow:

I think this is a lot of worry and a lot of noise. And there’s some real implications to this. Let’s be clear. You know, this is a message to supporters that I hope doesn’t turn violent, that I hope doesn’t involve intimidating people that are counting the votes, but I have confidence that we’re going to get a good count of this vote.

But Ruhle wanted stronger condemnation. She fretted over a caravan of supporters in Texas who surrounded a Biden campaign bus:

This is the President of the United States at a time where people are fired up, where we are worried about the threat of violence. So isn’t it overly simplistic to say, well, you know, that’s not how the system works. Yesterday, over the weekend, we saw a caravan of Trump pickup trucks surrounding the Biden bus!

Ruhle again obsessed over the Trump caravan with Biden-backer and former Homeland Security Secretary Tom Ridge. She griped, “The President’s first reaction was to criticize the FBI for investigating this. Can you imagine if these same people were black Americans, would the president have the same response?”

The obvious question is how does Ruhle or Trump for that matter, know the ethnicity of the drivers? You certainly can’t tell anything from the videos MSNBC showed. Why do liberal anchors have the constant need to bring race into topics that don’t warrant it?

Ruhle also touted how liberal cities like Washington D.C., New York City and Los Angeles were boarding up windows downtown because of the threat of violence after the election…from Trump supporters:

The chaos spread to New York and New Jersey yesterday when a caravan of Trump supporters blocked traffic on two major roadways. Officials in several cities are preparing for violence that they fear could break out this week. Boarding up windows and running police drills.

As Ridge explained that nothing Trump says surprises him anymore, Ruhle spread fear about violent conservatives, again: “Okay. Then we’re not surprised, but does it worry you how the president could respond to possible violence that could break out in the wake of the election?”

MSNBC covering for violent leftists was paid for by advertisers Dell and HughesNet, whom you can contact at the Conservatives Fight Back page.