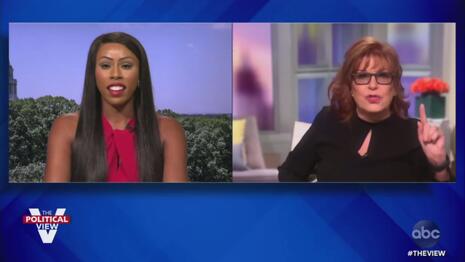 GOP congressional candidate for Maryland’s seventh district Kim Klacik, whose powerful campaign ad about how Democrats have destroyed Baltimore drew the attention of President Trump, appeared on The View today and there were definitely fireworks.

While co-hosts Meghan McCain and Sara Haines were polite to their guest, liberal co-hosts Joy Behar, Sunny Hostin, and Ana Navarro were extremely hostile particularly because the young, black Republican woman strongly defended President Trump on the issue of racism. In fact, she made them so angry that the liberal hosts ganged up on her and shouted her down to end the show.

After Klacik explained how there was blame to go around in response to Haines asking if Trump was responsible for minority coronavirus deaths, Behar lost it. She interrupted to demand Klacik put some blame on the President.

That’s when Hostin revealed just how much hatred liberals have for black conservatives. She literally shouted down Klacik and wouldn’t let her speak as she insulted her:

Hostin and Behar wouldn’t let Klacik get a word in edgewise before cutting to commercial:

Believe it or not, it was calm before this disastrous end to the interview. Despite being a businesswoman and not a seasoned politician, Klacik held her own and was ready to combat every hostile question from Hostin and Behar (and you can read some of these exchanges in full at the bottom).

ABC’s highly partisan show with hosts who shout and demean their conservative guests was paid for by advertisers Swiffer and Febreze.

SARA HAINES: You have a big tide to turn because Baltimore is a city where Democrats have been in charge for 53 years, and as recently as April, you lost the special election to fill Elijah Cummings’ seat which he held for 24 years. So why should people vote for you? Give us your best sales pitch. Why you, why now?

KIM KLACIK: I do want to point out you know the seat did not belong to Congressman Cummings. It belongs to the residents of Maryland’s district 7. I want to represent people in all parts of the district. People were saying, why were you picking the bad parts of the district? It’s not picking the bad parts. If I’m going to represent this district, I need to represent everyone equally. Obviously there are disparities and we know that president trump sent 15.7 billion to Baltimore City in 2018, and we don’t know where that money has gone. 17,000 vacant homes. If you even rehabbed those at 150 a pop, you would have rehabbed over 104,000 homes already. So that money is missing, and we need to not only find it, but implement it to get it where it’s supposed to go, and so I want to be that person.

SUNNY HOSTIN: Well, I lived in Baltimore City, and I know that’s a city you’ve never lived in even though you’re running to represent the district in Maryland. Sarah mentioned Elijah Cummings. What do you think is his greatest accomplishment, and how would you build on his legacy?

KLACIK: Well, I have been working in Baltimore City, just so you know for the past eight years with my nonprofit of getting women employed. We’ve employed over 200 women, 30% went on to be financially independent, and I have a lot of love for Baltimore city, so I will continue that work. Elijah Cummings I’m sure did a lot for the city and the residents, but for the last 20 years, you’ve seen the city deteriorate. I know he was very sick in the end, and we have to get somebody in there ready to roll up their sleeves and get the work done. So I would never speak badly about congressman Cummings. You can see on the internet, I have pictures with him. At the same time though, we’ve got to get the work done.

JOY BEHAR:  You know, Kim, you mentioned just a minute ago that where did the money go. My understanding is that the Democrats passed a second stimulus bill, but Republicans blocked it. How do you answer that?

KLACIK: Did they block it or did they want a certain amount of money and things going towards, you know, basically the people in America? You know, there was a lot of other issues written in the stimulus bill, and really the stimulus bill should be those that were affected by the coronavirus pandemic, no?

BEHAR:  Well, yes, but they blocked the bill.

BEHAR: Maybe they should get with the program and realize in your party that people are needing the money right now and get off their high horse! So here’s my question. At an ABC town hall this week, a black pastor confronted Trump about his campaign slogan, Make America Great Again asking him when has America ever been great for the black community in America. How would you answer that question?

KLACIK: Yeah. So this is the greatest country in the world. That’s why we have so many people coming to this country. We have immigrants, you know, entering the country illegally just to get here because this is the land of opportunity, you know, we have the education. There are career opportunities in other areas, maybe just not in Baltimore City, but this is a great country and it has been for a very long time.

ANA NAVARRO: I wonder then if it’s such a great country and has been for such a long time, why we need to make it great again? I agree with you, it’s a great country and it’s already great. It doesn’t need to be made great again. I have a question for you. I’m wondering if either from before his time as president or now as president, whether it was the calling of the death penalty for the central park five, now the exonerated five, or the lawsuit by HUD against the Trump organization in the ‘70s for housing discrimination or the many things he has said and done as president. Is there anything that you take issue with, or that you find racist in what Trump has done in his life before or after the presidency?

MEGHAN MCCAIN: Yes, Kim. So you spoke on the first night at the RNC, and in your speech, you said, quote, Joe Biden believes we can’t think for ourselves, that the color of someone’s skin dictates their political views. I’ve also found that our gender apparently dictates our political views and when it comes to be conservative women, we’re heretics that the media likes to believe doesn’t exist. Do you think liberals like to pigeonhole minorities saying that they can predict their political beliefs base on race.

KLACIK: Absolutely. They don’t only predict it they kind of provoke it right? I think they want us to vote the same, but as you see Baltimore City, voting for one party, that mob rule leads to corruption, and I was really offended when VP Biden said, you ain’t black. If you have to figure out between him and president Trump. I am black, and I have to tell you, VP Biden has been in office for almost 50 years, and if you tell me that he actually cared about the black community, why hasn’t he done anything for all that time? President Trump, like I said earlier has done many things with only 3 1/2 years, so to me, it doesn’t even jive. But no. I believe liberals do put us in a box, and that’s why they’re always talking about, you know, different communities and I think the way they do it is actually divisive.

HOSTIN: You know, I will tell you that I was born in 1968 and black home ownership was at 41.1%, and in — now it’s at 41.2%. Black incarceration was at 604 per 100,000 in 1968. Now it’s at 1,730. Black unemployment 6.7% now its at 7.5%. I’m not really sure what it is that president trump has done for the black community, but I guess I’ll take your word for it. Let me ask you this. During ABC’s town hall, Trump said that he hopes there isn’t a race problem in the country, but he’s repeatedly branded anti-racism protesters in the U.S. as terrorists. Now while you say that — and let me also say, he’s pointedly declined to condemn right wing violence at those same demonstrations. While you say that black lives do matter, you are not a supporter of the black lives matter movement is my understanding. I want to know why not, and I also want to ask you, do you recognize that there is right wing violence also at these demonstrations?

KLACIK: Yes. I want to dial this all the way back. Thank you for all your questions and your stats in the beginning there. I’m running against my opponent who was there from 1987 to 1996, so all your stats are very accurate, and they’re accurate because my opponent and Joe Biden signed over that 1994 crime bill which led to a lot of those numbers you just laid out. Now I will say that black lives matter movement started out great. There was a lot of peaceful protesters that are involved in it, but at some point, it was hijacked. Now we have people coming into cities and these are outsiders, if you look at the arrest records, they’re outsiders coming into cities, coming in to cities, burning down businesses and a lot of them minority-owned businesses in the name of I don’t even know what. I don’t know what their list of demands are. They say they want to defund the police, and at the same time if you take a look at that, It doesn’t even make any sense. If you want police to have more training and be better equipped for their job, you would add funding. Sp I know you said, Do I believe there are right wing instigators? Yeah. There are instigators from all types, all types of groups. This isn’t something where you can say Democrat or Republican. It’s on both sides for sure.

[in response to Klacik saying blame to go around on coronavirus]

JOY BEHAR: Come on, Kim. Excuse me. I have to say something to you. He told Bob Woodward that it was a very serious issue, and it’s airborne and that it was terrible, and then he went out and told the American people, don’t wear masks. It’s all going to go away.  You have to put some blame on your president. I’m sorry. You’re putting it on something extraneous. Talk to the point please.

KLACIK: Is this — is this Joy speaking?

KLACIK: — that paraded around —

KLACIK: — in blackface not too long ago? C’mon Joy I don’t think you should be asking me questions.

BEHAR: — excuse me. The black community had my back. They know that that was not blackface.

KLACIK: The black community has my back.

BEHAR: That was an homage. Oh —

KLACIK: The black community has my back.

KLACIK: The community has my back as well.

KLACIK: The [black] community has my back as well.

HOSTIN [yelling]: The black community has your back?

HOSTIN: The black community has your back?

HOSTIN [yelling] [talking over Klacik]: The black community did not vote for you.

KLACIK: Well, you know what?

HOSTIN: The black community did not vote for you!

KLACIK: It was during a special election.

HOSTIN: What planet are you living on?!

KLACIK: Sunny, can I speak?

HOSTIN: What planet are you living on?

KLACIK: It was during a special election–

KLACIK: –while we were still under lock down and I could not talk to people.

MCCAIN: Can we all be respectful?

KLACIK: Can I speak, or are you just going to scream over me?

BEHAR: All of a sudden, this becomes a big — Listen, Kim, good luck to you. Thanks to Kim Klacik. We’ll be right back. Bye!

KLACIK [to Hostin]: That was very immature, but thank you for having me.