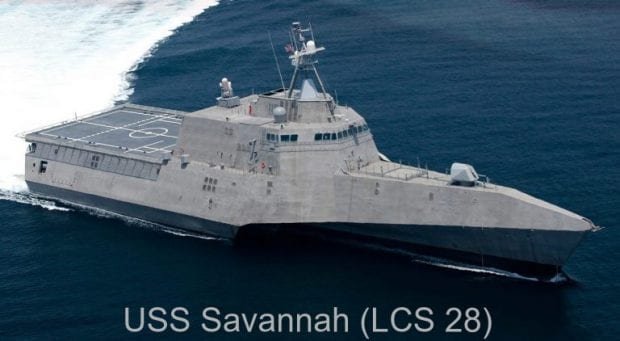 Assistant Secretary of the Navy for Research, Development, and Acquisition James Geurts will deliver the christening ceremony’s principal address. Mrs. Dianne Isakson, wife of former U.S. Senator John Isakson, will serve as the ship’s sponsor. In a time-honored Navy tradition, Mrs. Isakson will christen the ship by breaking a bottle of sparkling wine across the bow.

“Today we christened the sixth USS Savannah following an outstanding record of service named for a great American city. In so doing we move one step closer to welcoming a new ship to Naval service and transitioning the platform from a mere hull number to a ship with a name and spirit,” said Secretary of the Navy Kenneth J. Braithwaite. “There is no doubt future sailors aboard this ship will carry on the same values of honor, courage and commitment upheld by crews from earlier vessels that bore this name.”

The LCS class consists of two variants, the Freedom-variant and the Independence-variant, designed and built by two industry teams. The Freedom-variant team is led by Lockheed Martin in Marinette, Wisconsin (for the odd-numbered hulls). The Independence-variant team is led by Austal USA in Mobile, Alabama, (for LCS 6 and the subsequent even-numbered hulls).

LCS 28 is the 14th Independence-variant LCS and 28th in class. It is the sixth ship named in honor of the city of Savannah. The first was a coastal galley that provided harbor defense for the port of Savannah, 1799-1802. The second USS Savannah, a frigate, served as the flagship of the Pacific Squadron and then served in the Brazil Squadrons and Home Squadrons, 1844-1862. The third USS Savannah (AS 8) was launched in 1899 as the German commercial freighter, Saxonia. Seized in Seattle, Washington, upon the outbreak of World War I, the freighter was converted to a submarine tender and supported submarine squadrons in both the Atlantic and Pacific, 1917-1926. The fourth USS Savannah (CL 42) was a Brooklyn-class light cruiser commissioned in 1938. The warship served through the entire Mediterranean campaign, receiving three battle stars for service before decommissioning in 1945. The fifth USS Savannah (AOR 4) was a Wichita-class replenishment oiler commissioned in 1970. AOR 4 earned one battle star and a Meritorious Unit Commendation for service in the Vietnam War. The oiler provided underway replenishment services in the Atlantic and Indian oceans until decommissioning in 1995.