NBC Frauds Allow Biden to Skate by in Evening of Softies; Only One Question from the Right 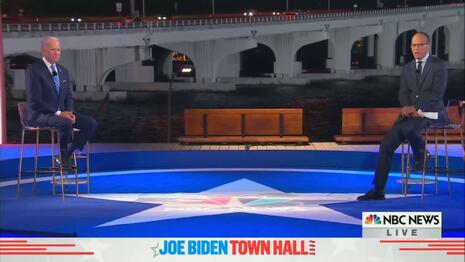 For the second time in a month, Joe Biden participated in a TV townhall and faced voters. But as was the case with CNN’s September 17 affair, on Monday, NBC rolled out the red carpet for the Democrat in Florida with an evening full of softballs. Speaking to an audience of Florida voters, Biden faced a total of 11 questions and six came from the left, four neutral, and only one from the right.

NBC Nightly News anchor Lester Holt wasn’t any better in grilling Biden, rhetorically holding his hand throughout the hour-long program with six follow-ups/queries/questions from the left, six neutral, and only one from the right. All told, the evening was even softer than CNN’s sham town hall and both an abomination compared to the hornets nest President Trump dealt with September 15 on ABC.

Unlike with CNN’s town hall or ABC’s with the President that provided party label or whom they voted for in 2016, NBC Nightly News anchor Lester Holt showed laziness in labeling questioners as four were never given a label, two leaning toward Biden, two as undecided, two as Republicans who supported Hillary Clinton in 2016, and one voting for the first time.

The most absurd question of NBC’s event came 25 minutes in as a leaning-Biden voter asked: “Watching the debate, I noticed that President Trump was bullying you and I’m worried it knocked you off your game. How do I know that you’re able to forcefully lead this country moving forward when being faced with unforeseen challenges and other bullies?”

Right behind it in the absurd category was an unlabeled voter lobbing a softball about birth control wondering how he would “protect women’s reproductive rights” because “access to birth control and safe reproductive health care” is “imperative.”

Here were the others, which dealt with the American Dream, the coronavirus, socialism, and white supremacy (click “expand”):

VANESSA TAMARIZ [no label]: Vice President Biden, I work in Miami as a pediatric nurse and since the beginning of this pandemic the government has been dysfunctional and disorganized in their response. Miami-Dade County leads the state of Florida in the number of COVID cases and deaths. Florida ranked number two in the COVID cases of children. Another larger wave is expected this fall, sir. Can you tell us what the Biden/Harris federal response plan is that would unite our country in fighting this pandemic and also any other future pandemics that may arise?

NICOLE MADDOX [undecided voter]: So, as an African-American female I have never lived through what I’m living through right now and at times I don’t feel safe in this country. And so, my question is what would you do to stop extremist and white supremacist groups…And what would be your approach to police reform to ensure that people who look like me and my family feel safe in this country?

PETER GONZALEZ [no label]: I was born in Hartford, Connecticut. I was raised in Hialeah Florida, and I’ve been living in Coral Cables for the last 20 plus years. Cuban American and Venezuelan voters here in South Florida are being targeted with messages by the Trump campaign claiming that a vote for Joe Biden is a vote for the radical left and socialism and even communism. What can you tell people in my family and friends who are concerned with that issue that would make them feel comfortable voting for Joe Biden and Kamala Harris?

MATEO GOMEZ [first time voter]:  If you win in November, there will be a 56-year age gap between you and myself. My generation, Generation Z, is growing up with school shootings, police brutality, and protests, and the inability to earn a livable wage even when holding advance degrees like myself. How can someone like yourself, an older white male, represent my generation? And please, Vice President Biden, can you guarantee me that the American dream still exists?

Republican-turned-Hillary voter Michelle Cruz Marrero offered the only right-leaning question, wondering how Biden would balance “reforming the police” with public safety because “the term ‘defunding the police’ is of concern and troubling.”

As for Holt, his only right-leaning point was when he noted Biden’s been in government for almost half a century and never passed criminal justice reform like the First Step Act (after having been a major player behind the 1994 Crime Bill). Notably, that topic was one of Anderson Cooper’s four times he challenged him from the right.

Holt became more neutral and less present as the night wore on, only stepping in to ask the Democratic candidate to provide a more detailed answer (and when not introducing an audience member or coming out of/going into commercial breaks).

But in the first ten minutes, his COVID and health-related questions were a joke. Click “expand” to see those:

8:04 p.m. Eastern: I have to ask about some of the things Hallie just mentioned there. The President discharged from the hospital today, flown aboard Marine One back to the White House. At one point, he climbs the stairs and he takes his mask off with other people who appear to be somewhat nearby. Did you see it? Did you hear about it? What’s your reaction, sir?

8:05 p.m. Eastern: You’ve built your campaign around the coronavirus – has been your number one issue. When you hear that this President was infected with COVID-19, were you surprised?

8:07 p.m. Eastern: I want to ask you about the information we’ve been given on the President’s medical condition from his doctors at Walter Reed, also some of the information about his condition from the White House. Do you think that doctors have been forthcoming, that they’ve been transparent? Do you trust the assessments?

8:07 p.m. Eastern: You were on the debate stage with the President for 90 minutes. You were socially distance, but hearing he was infected did you have a moment of pause, of worry, of concern for your own safety?

8:08 p.m. Eastern: If you become president, can you pledge transparency about your health if, God forbid, something like this happened or some other health condition that you would be forthcoming?

To read more about CNN’s townhall with Biden, go here. And to see how both stood in bold contrast to ABC’s ambush of President Trump (led by chief anchor and Clinton official George Stephanopoulos), follow the links here and here.

NBC’s fluffing of Biden’s pillows was brought to you by Amazon, Ancestry, Prevagen, and Progressive. Follow the links to the MRC’s Conservatives Fight Back page.