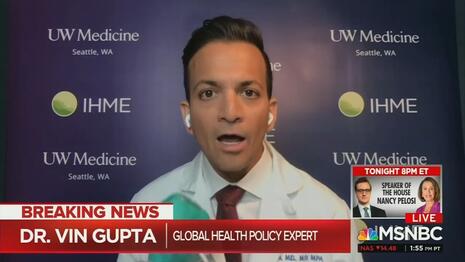 The liberal media loves to pose as the defenders of Science, and part of the game they play is by turning to medical experts with left-wing political backgrounds that they hide. CNN hides the losing Democrat political campaigns of its doctors Rob Davidson and Abdul el-Sayed. NBC and MSNBC have hidden that their “global health policy expert” Vin Gupta is an adviser to the Biden campaign.

In ten NBC News appearances and 31 MSNBC appearances found in Nexis from July 15 to September 15, these networks never, ever mentioned a Biden link.

Back in January, CNBC reported that addition to his NBC work,. “Gupta has also worked as a volunteer advisor for Joe Biden’s ‘Biden for President’ group.” One medical website even suggested with all this TV work, he might be considered for Surgeon General if Biden wins.

Dr. Gupta’s touted by his medical credentials as he bashes Trump like every other MSNBC political pundit. This tactic seemed most egregious as MSNBC brought Dr. Gupta on TV every night to “fact check” the Republican convention on the coronavirus. When speakers on August 24 touted Trump as saving lives, Rachel Maddow turned to Gupta, who said “A lot of that was hard to listen to, and this is not as a partisan, but as a clinician.”

On August 27, Dr. Gupta gave two thumbs up to Kamala Harris, as one would expect a Biden adviser to do:

MADDOW: Doctor, in terms of us understanding what could have been, Kamala Harris today gave a speech where she said, it didn’t have to be this way, all we needed was a competent president. Is she — is that fair to say?

This kind of energetic Democrat spin is quite routine — and Gupta routinely tells his MSNBC hosts they “nailed it” with their partisan assertions. Here’s Gupta on Deadline: White House on September 14:

NICOLLE WALLACE: Global health policy expert and MSNBC medical contributor Dr. Vin Gupta is here. Dr. Gupta, I have to start with you and that fire coming from the Governor of Nevada. Nevada has struggled, both with the decimated economy so dependent on casinos and gambling and indoor recreation. The kind that represents super spreader risk which I learned from folks like yourself but Donald Trump’s open defiance of the science and the things that will keep his voters safe on display last night. It was stunning to see.

VIN GUPTA: And it was an embarrassment to him and his administration, Nicolle. And you know, this is getting — these shenanigans are, enough is enough. I love the well-played standard of the Nevada governor. Because this type of event — I mean, this is one of the worst types of events I think I have ever seen! That is saying something coming from President Trump.

You had the majority of individuals, thousands not socially distanced, not practicing masking. Almost basking in the glow of participating in an event where the president was presiding over something that was not science based and that is almost doubling down on his complete recklessness when it came to ignoring the advice that he was given in early February.

As I noted in June, Dr. Gupta insisted we need to “ban political rallies” on Morning Joe, but he said he was marching in Seattle “racial justice” protests. “We want as much as anything for social justice to take center stage, because poverty, racism, they have actually [been] bigger killers than coronavirus by the statistics, so this is the right thing to do, but to do it safely.”