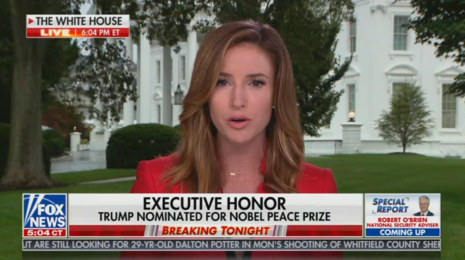 It was easy to tell the broadcast networks were in full campaign mode on Wednesday seeing as they spent large chunks of their evening newscasts hawking yet another anti-Trump book, Rage by Bob Woodward. But while they spent over 16 minutes (16:26) being up in arms over something President Trump said publicly back in April, they used it to cover-up how the President was nominated by a member of the Norwegian Parliament for a Nobel Peace Prize, for his work in the Israel-UAE peace deal.

The CBS Evening News dedicated by far the most time to the book, over seven minutes (7:08) between three different segments, with one just about Joe Biden’s reaction. Next, was ABC’s World News Tonight with over five minutes (5:09), and NBC Nightly News brought up the rear with over four minutes (4:09).

In the time they dedicated to Woodward’s book and his “blockbuster recordings,” the liberal news outlets boasted how the “revelations” were “threatening to upend his reelection campaign,” as CBS anchor Norah O’Donnell did there. The effect was to make it seem like Trump had lied about the seriousness of the virus, and thus was the murderer of over 180,000 Americans.

“The White House is in full-on damage control mode tonight, after these revelations about what the President knew and what he told the American people and it’s all on tape,” declared correspondent Ben Tracy. CBS briefly disclosed that their parent company, Viacom also owned the book’s publisher, Simon & Schuster (a publisher of many anti-Trump books).

But if Tracy wasn’t such a liberal hack, he would have reminded viewers that he himself was going back-and-forth with the President during April 7 news conference, when he explained why he didn’t want to send the public into a panic:

You have to understand I’m a cheerleader for this country. I don’t want to create havoc and shock and everything else….But at the same time, I’m cheerleading, I’m also closing down a very highly-infected place, specifically the location, as you know, in China, that had the problems.

This comment was obviously caught on video and broadcast around the country. The liberal media attacking him for it at the time. But Labor Day had just happened and the election season was in full swing, so they’re rehashing their old talking point; thinking the American people wouldn’t notice.

Unlike the networks, Fox News Channel’s Special Report managed to walk and chew gum at the same time, covering both the book and the peace prize nomination.

“[In] other news that the White House would have preferred to focus on today, a member of the Norwegian parliament has nominated President Trump for the Nobel Peace Prize, citing his work on the historic peace deal between Israel and the United Arab Emirates. And that peace deal is going to be signed here at the White House next week,” reported correspondent Kristin Fisher.

In speaking about the peace deal later in the show, National Security Advisor Robert O’Brien noted to anchor Bret Baier that more Muslim-majority countries were moving to acknowledge Israel. “And since that time, Kosovo has — a Muslim-majority country — has said that they are going to recognize Israel and move their embassy to Jerusalem. I think you’re going to see other countries do it, but they’re complex difficult negotiations,” he said.

This intentional omission of Trump Nobel Peace Prize nomination was made possible because of lucrative sponsorships from Safelite on ABC, Fisher Investments on CBS, and Wayfair on NBC. Their contact information is linked so you can tell them about the blatantly political news they’re funding. CBS Evening News has also asked people to text Norah at this number: (202) 217-1107.