Nets in 2019: ‘NO EVIDENCE’ Hunter Biden Did Anything Wrong! 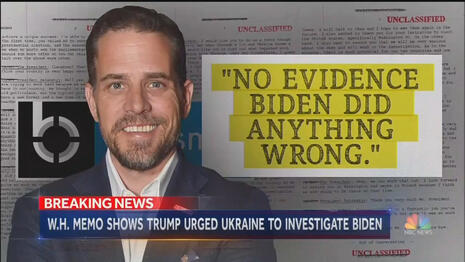 Back in 2019 the Big Three nets were determined to bury the Hunter Biden scandal as they repeatedly told their viewers “There was no evidence” Joe Biden’s son had done “anything wrong.”

They were so obsessed with trying to get Donald Trump impeached over a phone call with Ukranian president Volodymyr Zelensky they just about bypassed Hunter’s problems.

Here’s what NewsBusters wrote back on October 1, 2019:

In just ten days (September 20 through September 30, 2019) the broadcast networks overwhelmed their evening and morning shows with more than 7 hours of coverage devoted to a whistleblower’s complaint about President Donald Trump’s phone call with Ukranian president Volodymyr Zelensky and the ensuing calls for impeachment.

Only 46 minutes of that coverage referenced Democratic frontrunner Joe Biden’s son Hunter Biden’s sweetheart deal with a Ukranian company. Even when networks mentioned Trump’s concern about Hunter benefiting from his father’s status as Vice President, they were quick to dismiss the allegations with the refrain: “no evidence of any wrongdoing.” See montage video below:

On the September 23, 2019 edition of ABC’s World News Tonight correspondent Jon Karl conceded: “Hunter Biden did make tens of thousands of dollars a month working for a Ukranian company while his father was Vice President. But” he dutifully added, “there’s been no evidence of any wrongdoing.”

CBS correspondent Ben Tracy, on the September 20, 2019 Evening News also exonerated the Bidens:  “The President’s personal attorney Rudy Giuliani claims – without proof – that Joe Biden tried to bribe the Ukranian government to get his son out of legal trouble.”

Over on the September 20, 2019 NBC Nightly News, correspondent Hallie Jackson also downplayed any conflict of interest involving Hunter Biden: “The President’s personal attorney Rudy Giuliani has suggested then-Vice President Biden tried to stop an investigation into a Ukrainian company that named his son to it’s board, despite no evidence of wrongdoing by Joe Biden.” 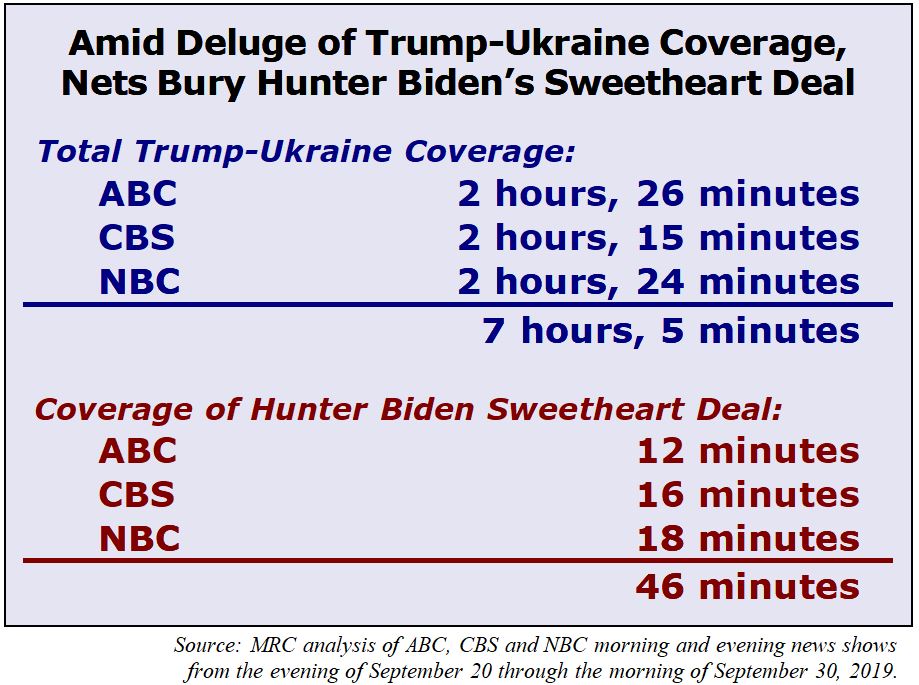 But if the networks dared to look just a little bit into Hunter Biden’s history with the Ukranian energy company Burisma, they’d find plenty of evidence of questionable behavior involving the  Bidens – that would be worth more than 46 minutes of coverage.

The New Yorker’s Adam Entous, in a July 1, 2019 article headlined “Will Hunter Biden Jeopardize His Father’s Campaign?” detailed that at the time even Obama administration officials were worried about a conflict of interest:

“Several former officials in the Obama Administration and at the State Department insisted that Hunter’s role at Burisma had no effect on his father’s policies in Ukraine, but said that, nevertheless, Hunter should not have taken the board seat. As the former senior White House aide put it, there was a perception that ‘Hunter was on the loose, potentially undermining his father’s message.’ The same aide said that Hunter should have recognized that at least some of his foreign business partners were motivated to work with him because they wanted ‘to be able to say that they are affiliated with Biden.’ A former business associate said, ‘The appearance of a conflict of interest is good enough, at this level of politics, to keep you from doing things like that.’”

The following are a few more examples of network anchors and reporters brushing aside the Hunter Biden scandal:

Co-host George Stephanopoulos: “Yeah and the president said – talked about Joe Biden corruption there. Of course, there’s no evidence on the record that Joe Biden acted in a corrupt way at all.”
Correspondent Jon Karl: “No evidence at all. The president is out there repeating it. And so is his attorney, Rudy Giuliani.”
— ABC’s Good Morning America, September 23, 2019.

“The Wall Street Journal says during that July 25th phone call, Mr. Trump asked the new Ukrainian president about eight times to investigate Joe Biden and his son, Hunter. When Biden was V.P., he threatened to withhold U.S. loans from Ukraine unless it got rid of its top prosecutor. The president and other Republicans accuse Biden of doing so because Hunter Biden was a board member at an oil company the prosecutor was investigating. Biden and his son have denied all wrongdoing, and there is no evidence of any.”
— Co-host Tony Dokoupil on CBS This Morning, September 23, 2019.

(For this study MRC analysts looked at ABC’s World News Tonight and Good Morning America; CBS Evening News, CBS This Morning and CBS Sunday Morning; NBC Nightly News and Today from the evening of September 20, when it became known that President Trump had spoken to the Ukranian president, to the morning of September 30, 2019.)