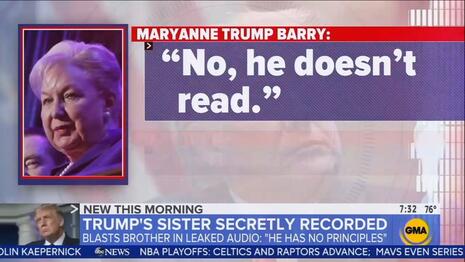 ABC, CBS, and NBC all jumped to report on secret tape recordings made by Trump’s hate-filled niece Mary Trump of the president’s sister Mary Trump trashing him as an unprincipled liar.

Now please try to imagine if a Clinton relative taped Hillary speaking ill of Bill. Would The Washington Post leak that tape? The day before a Democrat convention?

Or is it more likely the leaker would only find interest at Fox News, after which the entire media would trash the leaking relative as the tawdriest human being in America?

The Post and the networks are happily working with Mary Trump to give her book another boost of publicity, and the networks never questioned if a niece secretly taping her aunt was ethical. The timing is exquisite for the Democrats.

On Sunday night and Monday morning, CBS and NBC folded their Sister Trump Tapes story into broader stories on the president, adding up to 95 seconds on CBS and 103 seconds on NBC. It was ABC that really relished this story. On Sunday night’s World News Tonight, they aired a full report lasting two minutes and 18 seconds.

On Monday’s Good Morning America, they gave it three minutes and 42 seconds, adding up to six minutes overall. George Stephanopoulos hyped the tapes as “shocking” as the president’s sister sounded like your run-of-the-mill Democrat.

TOM LLAMAS: A lot of families have their quirks and their dramas, but the Trump family is hitting a new level. It is getting ugly and as you just mentioned, it’s happening right before the president and his party’s convention.

MARYANNE TRUMP BARRY: He has no principles, none, none…You can’t trust him.

TRUMP BARRY: And his god [ bleep ] tweeting and the lying, oh, my God. I’m talking too freely, but you know the change of stories, the lack of preparation, the lying, the holy [ bleep ]. He’s appealing to the base. What they’re doing with the kids at the border, I guess he hasn’t read my immigration opinions, but, you know, in one ear own out the other.

MARY TRUMP: What has he read?

TRUMP BARRY: No, he doesn’t read.

Llamas also reprised the unproven allegation that Donald Trump had someone else take his S.A.T. college admissions test in 1964. They played tape of Stephanopoulos asking Mary Trump how she would know that. “I’ve been told this by people in my family. I am absolutely confident that it’s true.”

Elizabeth Warren also said she was Native American because she was told by people in her family. But they had a snippet of tapes where Trump’s sister  said he “wired” his tests.

The president calls this conspiracy theory “false,” but ABC was happy to spread it — anything to bring ants to the Republican picnic.