Over the last few years, NBC’s Saturday Night Live has grown increasingly obnoxious in its leftist political posturing. When Hillary Clinton lost, they had their Hillary impersonator sing a sad song. When Obama prepared to leave office, they earnestly sang “To Sir with Love.” All of that was nothing like opening a new season by rooting for the coronavirus to beat President Trump.

In the world of the Left, impersonating Chris Rock in blackface is much, much more offensive than rooting for the coronavirus against the president. Jerry Dunleavy tweeted this line echoed Michael Moore.

NB’s Curtis Houck captured the essence of its nastiness on Twitter, starting with vicious Trump-hater Jim Carrey calling the president’s sickness a satisfying combination of “Science” and “Karma.”

Here’s the video. After having used a TV remote to freeze Alec Baldwin’s Trump, Carrey’s Biden steps out from his debate podium to say he wishes “karma” and “science” would collide regarding coronavirus before looking over at “Trump.” Sure enough, crowd goes crazy in approval. pic.twitter.com/MqSU2pp3tm

It’s um, interesting, that Twitter — which has a nasty streak of censoring mockery of the Left as “hate speech” — calmly promoted SNL at “Trending” as Jim Carrey’s debut. (And the promo package includes Marlow Stern of the Daily Beast tweeting out Science and Karma.) 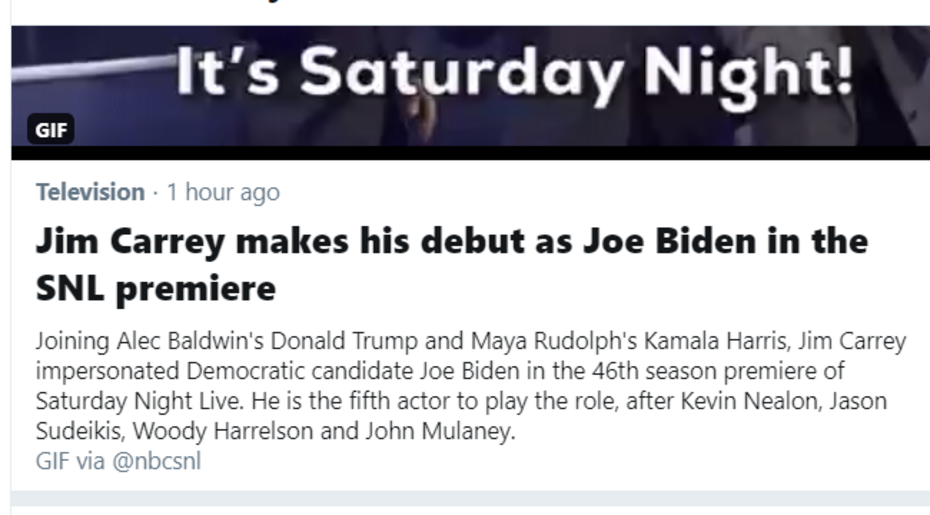 Video thread: After SNL’s Cold Open and Chris Rock joked about/celebrated Trump being hospitalized with coronavirus, SNL, ‘Weekend Update’ makes clear they too are happy and would like to see his condition take a turn for the worse. (1/) pic.twitter.com/WbXskDLlyK

After comparing Trump to Scrooge, Michael Che mocks those saying it’s not funny Trump is very sick: “The problem is it’s almost too funny. Like it’s so on the nose it would be like if I were making fun of people who wear belts and then my pants just immediately fell down.” (2/) pic.twitter.com/Qu0NFOfqVi

To a gleeful audience, Che adds: “By the way, is anyone surprised by this? I honestly thought Trump was trying to get coronavirus….Look, I don’t want the President to die, obviously. Yeah. Actually, I wish him a very lengthy recovery.” (3/) pic.twitter.com/6HXFerqooS

Jost concludes: “It sounds like they’re cutting his hydroxychloroquine w/a little bit of Molly…[I]f the situation were reversed and it was Biden who got sick, Trump would 100% be at a maskless rally tonight getting huge laughs doing an impression of Biden on a ventilator” (4/4) pic.twitter.com/xL0ZkEsUVU

For the exact opposite of the “To Sir, with Love” song for Obama, rapper Megan Thee Stallion attacked Daniel Cameron, the black Republican Attorney General of Kentucky as a “sellout Negro.” They actually ran a soundbite from left-wing activist Tamika Mallory, a woman who refused to separate herself from her anti-Semitic friend Louis Farrakhan.

During Megan Thee Stallion’s performance of Stallion on SNL, a soundbite of Tamika Mallory is played of her calling Kentucky’s black AG Daniel Cameron “no different than the sellout negros that sold our people into slavery.”

And the crowd broke into cheers and applause. pic.twitter.com/U5DLPFvOmg

All of this hatred was brought to you by the following:

Netflix’s The Trial of the Chicago 7