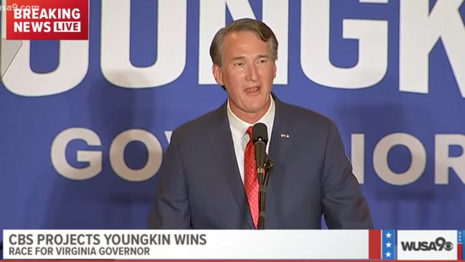 It’s time for the post-election Bitter Tears Edition of the NewsBusters Podcast, recounting the media meltdowns as the Republicans took over all the statewide elections in Virginia and retook the House of Delegates.

When our media Democrats figure out they’re going to lose, the anger about the “whitelash” is guaranteed. Losing politicians might concede with grace, but journalists seldom do. They routinely lied that Republicans exploited white fears with Critical Race Theory, which is allegedly never taught, a ghost, a fakery. Taxpayer-funded NPR called it an “imaginary take.”

Glenn Youngkin separated himself from Trump and ran a campaign that was low on insults and mean tweets, but CNN’s Van Jones slimed him as the “Delta variant of Trumpism,” which spreads its virus more easily. Jack Ciatterelli was almost completely ignored by the networks, and he looked almost tied to Gov. Phil Murphy, the incumbent Democrat. What if the networks hadn’t ignored him and dismissed him as doomed?

Enjoy the podcast below, or wherever you enjoy your podcasts.