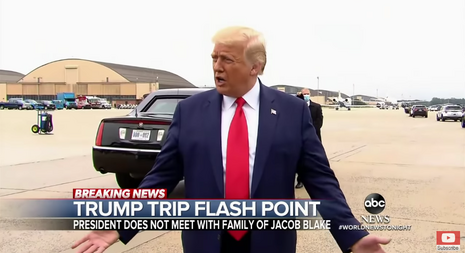 New York Times reporter Trip Gabriel made the front page on Thursday by warning about a “Trump ‘Bubble’ In the Suburbs Of Milwaukee,” painted a picture of the “segregated” suburbs heeding the president’s “racist messaging” by refusing against all sense of decency to support Joe Biden.

Gabriel lamented that Biden supporters were being oppressed by local Trumpers. In their neighborhoods, they’re losing their signs and having their chalk messages rubbed out. (Has the Times ever run a story on urban liberals harassing MAGA hat wearers?)

When Michael Hicks and his daughter chalked “Black Lives Matter” on the pavement outside their suburban home, someone scrubbed it away within hours.

Then Mr. Hicks put up a Black Lives Matter sign on his cul-de-sac, only to find it tossed in a dumpster. He finally tried sticking signs in his garden, but a neighbor complained, and he removed them to avoid harassment.

“They just seem to want to silence you in these suburbs,” said Mr. Hicks, who commutes from a condo in Grafton, Wis., to a Milwaukee school, where he teaches health and physical education. “They’re so happy in their comfortable bubble.”

As many suburban Americans reject President Trump, threatening his re-election like no other bloc of voters, the suburbs outside Milwaukee, among the most racially segregated in the country, remain a bulwark of support.
….

But around Wisconsin’s largest city, the suburbs’ prevailing whiteness tells a different story: In the region outside Milwaukee, including both inner suburbs and exurbs, Mr. Trump led Mr. Biden by 48 percent to 38 percent in a recent Marquette Law School Poll.

The segregation has seemed to play into Mr. Trump’s racist messaging around what he calls law and order, which he amplified on Sept. 1 during a visit to Kenosha after buildings were burned and businesses looted after the police shooting of a Black man, Jacob Blake.

“They’re all young kids and they’re Black, they’re just troublemakers,” David Sorenson, a white suburban voter, said of the protesters, while overlooking that a white teenager who had previously expressed support for the president has been charged with killing two people during the protests.

Keith Wetherell, a Biden supporter, called Mr. Trump’s claims of upholding law and order “a double standard” given the way his administration has trampled on democratic norms, including sowing false doubts about illegal voting in the coming election.

Both men said they feared putting up Biden yard signs because they would be stolen or might lead to a rock thrown through a window.

Such politicized vandalism should not be tolerated. Anecdotal evidence suggests it happens more to Republicans than it does to Democrats. Don’t wait for the Times to get around to telling that story.

This next paragraph was a giveaway that there’s no daylight between the Democratic Party and the mainstream media when it comes to knee-jerk opposition to Trump:

“The people for Trump don’t listen to the mainstream media,” said Karen Jeske, 61, who quit her job in public relations to volunteer full time for the Waukesha Democratic Party. “They have a wall up. How do we get through to them?”

“How do we get through to them?” Well, if reporters stopped pushing anti-Trump nothing-burgers like Russia-gate and started covering left-wing street violence, it would make a good start.

PS: To his credit, Gabriel let a Trump-voting Democrat explain her change of heart.

She said she had been “counting the days until Trump is out of the White House” — until the killing of George Floyd in May by the Minneapolis police, which caused protests to erupt around the country.

“Instead of being rational about it and looking at ways the criminal justice system could be changed, right away they started burning and acting like lunatics,” she said of protesters.

She dismissed the Black Lives Matter movement. “I think it’s just a kind of guise for looting, burning, committing acts of violence against the police,” she said.