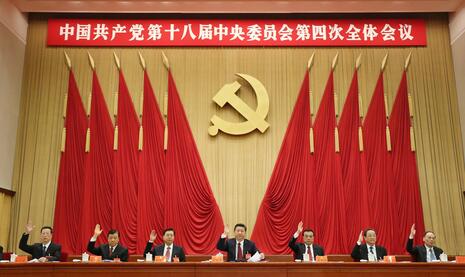 We now know what is apparently the price the New York Times is willing to pay in order to keep its correspondents in Communist China: the loss of any sense of journalistic integrity. The latest example of this comes in the form of a glowing paean to the Covid efforts of the Chinese Communist Party. A story on Friday that would make their old correspondent, Walter Duranty, proud, that bends the knee to the CCP with the open worship title of “Power, Patriotism and 1.4 Billion People: How China Beat the Virus and Roared Back.”

Although there are a few tidbits of mild criticism in a pathetic attempt to appear credible, the open slobbering over the CCP by Times correspondents Steven Lee Myers, Keith Bradsher, Sui-Lee Wee and Chris Buckley is so saccharine as to cause tooth decay. Here are a few examples of the absurdly sweet sonnets these correspondents were willing to compose for the CCP in order to keep reporting from China:

The Chinese Communist Party reached deep into private business and the broader population to drive a recovery, an authoritarian approach that has emboldened its top leader, Xi Jinping.

“Authoritarian” sounds so much nicer than the more accurate “totalitarian.”

In the year since the coronavirus began its march around the world, China has done what many other countries would not or could not do. With equal measures of coercion and persuasion, it has mobilized its vast Communist Party apparatus to reach deep into the private sector and the broader population, in what the country’s leader, Xi Jinping, has called a “people’s war” against the pandemic — and won.

They “won?” Who is claiming this? The CCP?

China is now reaping long-lasting benefits that few expected when the virus first emerged in the central Chinese city of Wuhan and the leadership seemed as rattled as at any moment since the Tiananmen Square crackdown in 1989.

The success has positioned China well, economically and diplomatically, to push back against the United States and others worried about its seemingly inexorable rise. It has also emboldened Mr. Xi, who has offered China’s experience as a model for others to follow.

Let us all follow the path of the all wise Mr. Xi. The guy who only allows Covid stats to be released that show the fight against that pandemic in China to be a “success.”

Beijing’s successes in each dimension of the pandemic — medical, diplomatic and economic — have reinforced its conviction that an authoritarian capacity to quickly mobilize people and resources gave China a decisive edge that other major powers like the United States lacked. It is an approach that emphasizes a relentless drive for results and relies on an acquiescent public.

The Communist Party, in this view, must control not only the government and state-owned enterprises, but also private businesses and personal lives, prioritizing the collective good over individual interests.

Yup! This article could rate as the biggest wet kiss to a Communist regime in the New York Times since its movie critic, Bosley Crowther, gave a glowing review to the pro-Stalinist film Mission To Moscow in 1943.

And now for a brief break in which the Times correspondents offer up just a bit of criticism in a pathetic attempt to appear credible:

…the Chinese Communist authorities suppressed speech, policed and purged dissenting views and suffocated any notion of individual freedom or mobility — actions that are repugnant and unacceptable in any democratic society.

Of course, the correspondents quickly return to CCP worship mode:

The government appeals to material interests, as well as to a sense of patriotism, duty and self-sacrifice.

The China Railway 14th Bureau Group, a state-owned contractor helping build the quarantine center near Shijiazhuang, drafted a public vow that its workers would spare no effort. “Don’t haggle over pay, don’t fuss about conditions, don’t fall short even if it’s life or death,” the group said in a letter, signed with red thumb prints of employees.

…In the beginning, the pandemic seemed to expose “the fundamental pathologies of Xi-style governance,” said Jude Blanchette, a researcher at the Center for Strategic and International Studies in Washington.

“In fact, with time and hindsight, we see that the system performed in large part as Xi Jinping was hoping it would do,” he added.