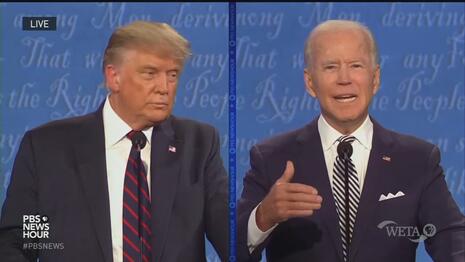 The interruptions were constant, and it was a mess. But the president made some excellent points about extremism in the Democratic Party and all the “deep state” intervention from the FBI and Team Obama trying to prevent his election and ruin his transition. The only problem is that a citizen would need a steady diet of conservative media to understand it all, since the liberal “news” people squash every contrary narrative.

Tim and Nick were both unfortunate enough to watch their debate on CNN, which led to a series of uncomfortable questions.

Who tunes in to see Jake Tapper chew the scenery and declare “this was not a debate, it was a disgrace!”

What on Earth did Anderson Cooper mean by saying Trump was “obesely immoral”?

Why did Don Lemon suggest Joe Biden was like a “tasty tuna melt”?

Which leads to the question: Why do they call it the Cable NEWS Network at this point? It’s really the Cable Opinion Network, a never-ending talk show.

Please enjoy, and share with your friends. Even the liberal ones!