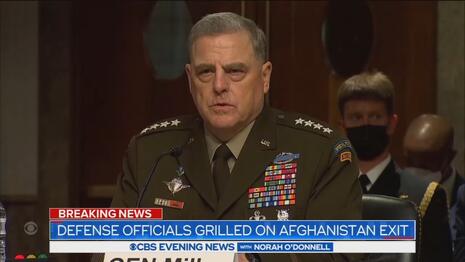 Generals used to specialize in fighting wars. But it seems like under Trump, Gen. Mark Milley was speaking to every liberal journalist writing an anti-Trump book. You wonder if Afghanistan would have turned out better if our top general wasn’t so busy “exposing” the president to help the liberals own the best-seller lists.

The networks were fairly tough on Tuesday night as Senators pressed the generals and the Secretary of Defense on the Afghanistan withdrawal fiasco. Sen. Marsha Blackburn asked Gen. Mark Milley which liberal reporters he talked to for their anti-Trump books. Bob Woodward of The Washington Post? Yes. Carol Leonnig and Philip Rucker of The Washington Post? Also yes. Michael Bender of The Wall Street Journal? Yes. When asked if these authors accurately conveyed his statements, he said he did not know, he had not read the books. No one should buy that.

In the second half of the show, we discuss the Joseph Vazquez story on how “The New Yorker Radio Hour” — which is not only a podcast but a public-radio show airing on 66 stations — promoted radical Swedish professor Andreas Malm, the author of How to Blow Up a Pipeline. The fancy-pants liberals are now discussing the alleged need for “intelligent sabotage” to save the planet. When you promote violence for the far left, how do you have any moral authority about the January 6 riot?

Enjoy the podcast below or wherever you enjoy your podcasts.