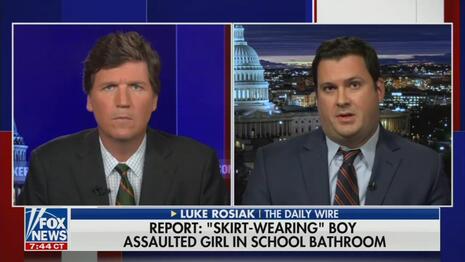 The Daily Wire broke it, and Fox News put it on television. A 9th-grade girl was allegedly raped in a Loudoun County (Virginia) high school by a “gender-fluid” male in a skirt. A month later, a contentious Loudoun County school board meeting on transgender policy included a denial that anything like this had ever happened in their schools. The liberal networks were silent as Tucker Carlson interviewed Luke Rosiak of the Daily Wire, and then Laura Ingraham interviewed the father of the alleged victim.

This story is a nightmare for the liberals, because it’s a real-life allegation when conservatives often complain that letting “gender-fluid” men or “trans women” into bathrooms or locker rooms could make them unsafe for actual women. This is a story they want to cancel, censor, ignore, squelch, or bury six feet under.

We also discuss Geoffrey Dickens finding that evening-news budget stories featured 115 soundbites of Democrats, and only 16 of Republicans. That slant is very hard to ignore. The networks did ignore Kamala Harris putting together a video promoting space and science for kids that used child actors. Instead, they all covered the supposedly brand-new “news flash” that Paul Cartney blames John Lennon for the breakup of the Beatles.

Enjoy the podcast below, or wherever you enjoy your podcasts.