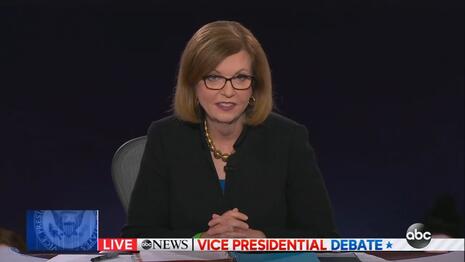 In a very special After-School episode of the NewsBusters Podcast, Tim Graham and Geoff Dickens assess what happened at the vice presidential debate in Salt Lake City on Wednesday night. Tim was not happy with the moderator, Susan Page of USA Today. She seems so mild-mannered when the appears on TV, but she threw hardballs at Mike Pence and often asked Kamala Harris open-ended inquiries like “Breonna Taylor….Was justice done?”

It looked like Mike Pence was the winner, because the Thursday morning shows were bland and surprisingly balanced. Trump-loathing CNN called it a “draw,” which suggests a Pence win.

They wrapped up this episode with a nod to Dickens working for the Media Research Center for 25 years, back when the monthly MediaWatch newsletter was the rage. In the first issue listing Dickens as a media analyst in August of 1995, they analyzed how Time magazine inveighed against how those “cultural Neanderthal” conservatives with their “Newtish zeal” were threatening federal funding for the National Endowment for the Arts.

Tim challenged Geoff to a lightning round on the first memory that comes to mind with the media and every presidential campaign from 1996 to 2016. This could be educational for the youngsters!