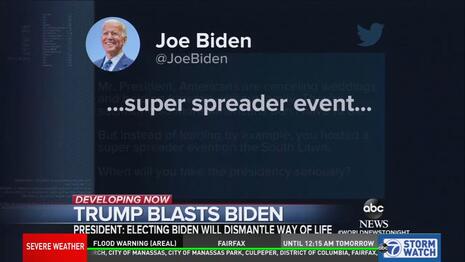 In the latest edition of the NewsBusters podcast, Executive Editor Tim Graham tackles the dramatic double standard in comparing President Trump’s big convention speech on the south lawn of the White House, compared to a large leftist anti-police protest in Washington the very next afternoon.

The Friday night newscasts audaciously portrayed Trump’s speech as a “super spreader event” — quoting a Joe Biden tweet — while the large shoulder-to-shoulder protest wasn’t painted as a risky or dangerous or delusional event where people were pretending COVID-19 is a “distant memory.”

For example, on Friday’s World News Tonight with David Muir on ABC, reporter Jonathan Karl scolded the delusional people: “Trump supporters shoulder-to-shoulder as if the pandemic that has raged for six months is a distant memory. The White House, his house….On many levels, an alternative reality, the gathering in defiance of CDC guidance and local health regulations. Today, Joe Biden called it a super spreader event. But the President, who has marginalized the medical experts and misrepresented the threat, proclaimed his handling of COVID-19 a smashing success.”

But the broadcast began with reporter Rachel Scott fervently promoting the protest, with only four words acknowledging a pandemic: “They lined up before dawn for a march unlike any the nation’s capital has ever seen, temperature checks and masks, a new generation gathering at the steps of the Lincoln Memorial, where Martin Luther King Jr. told the country he had a dream 57 years ago.” 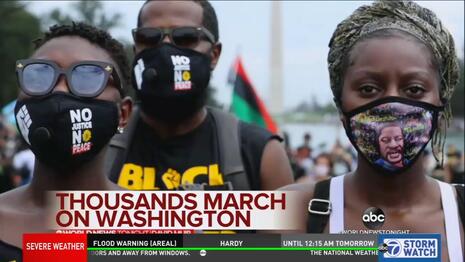 Tim broke down his latest podcast into an ABC’s of leftist media bias, with A for the Al Sharpton march, and so on. Other topics include:

Scott Whitlock on Joe Biden’s audience-free speech denying he looks like a radical.

Rich Noyes on the nightly convention break-ins. CNN and MSNBC stunk it up.

Bill D’Agostino’s amazing video on the partisan network aftermaths of the Biden and Trump speeches.

NPR promotes the book In Defense of Looting. Congressional hearings, anyone?