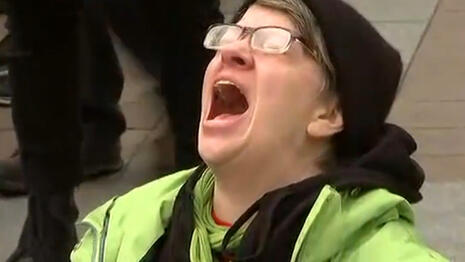 We know liberals have lost their minds these last 4 years. Their Trump Derangement Syndrome has been on display for the world to see. So fragile are their psyches that Newsweek brought on a “trauma psychologist” to offer the hope that “[e]ven after Trump, we can emerge stronger.”

Even after Trump, you say? That’s impossible! Trump’s election was the worst thing to happen in the history of everdom! Ah, but as Joan Cook, a psychiatry associate professor at Yale School of Medicine, reassured on October 20, contrary to popular belief, the country can survive the “chained series of traumatic events” known as the Trump presidency. Imagine that!

Cook purports to share her psychological expertise in what turns into a thinly veiled political screed, beginning:

For many Americans, the past four years have shaken or shattered our faith in U.S. government and common decency. Lowlights include President Donald Trump asking Ukraine to “do us a favor” and investigate his political rival, the longest government shutdown in U.S. history, multiple battles over right-wing Supreme Court appointments, repeated refusals to condemn white supremacy, separating immigrant children from their families, arrests and convictions of numerous presidential advisers and associates, relentless attacks on the Affordable Care Act, furious tweetstorms affecting U.S. policy, a catastrophically mismanaged pandemic that has killed more than 220,000 Americans and attempts to undermine the 2020 election.

Ok, so she listed a bunch of Democrat talking points and put “furious tweetstorms” on the same level as a once in a century global pandemic. So far, she’s got the liberal psychosis down pat.

“The list of seismic ethical and norm violations seems almost bottomless,” Cook writes dramatically. “And it is taking a psychological toll on the American people.”

Here we get to the political headshrinking:

As a trauma psychologist, I believe that, for many Americans, the past four years have assaulted our well-being, gravely damaged our connection with one another and qualify as a chained series of traumatic events. Gallup has reported that Americans are some of the most stressed people in the world, and the American Psychological Association found that most people name the current political climate as a significant source of anxiety.

But there’s hope! She advocates “that we embark on a process of post-traumatic growth,” which is when trauma “positively transform[s] people and leave[s] them with a renewed, reinvigorated perspective on and purpose in life.”

She says post-traumatic growth has been found to occur in “military veterans with life-threatening illness or injury, parentally bereaved children and adolescents, refugees, people living with HIV and those who have experienced natural or manmade disasters, as well as victims of crime” — because those are totally the same as having your preferred candidate lose an election.

In discussing the process to transformation, Cook advises, “[W]e don’t want to bury our heads in denial or minimization about the effects of the Trump presidency. But we also don’t want to become so overwhelmed in our anxiety and outrage that we can’t function appropriately or effectively.” Well, that ship has long past sailed.

We need to acknowledge and constructively work through the violations of the Trump administration to reorganize around our shared values and social norms. If we mourn the losses, tremendous setbacks and struggles encountered in the Trump presidency, we can find seeds of hope that post-traumatic growth is possible.

She also suggests we “reorder our priorities in meaningful, substantive ways,” such as “help dismantle systemic racism” and “join the rest of the world in mitigating climate change and advocating for world peace.”

“But the first step is voting,” Cook says and “Who better to show us the transformative power of suffering than former Vice President Joe Biden?”

Of course! The good doctor says the best medicine is to engage in liberal activism and elect Biden! Then can we “transform tragedy into triumph.”

This is like letting the inmates run the asylum. Cook clearly suffers from TDS and her prescription is not the cure. Physician, heal thyself.