These “get out the vote” specials are starting to become my least favorite genre. It doesn’t take a political genius to realize that whenever these things tell us to “vote” they really mean to “vote Democrat.” Take the latest propaganda courtesy of Freeform, Kal Penn Approves This Message. 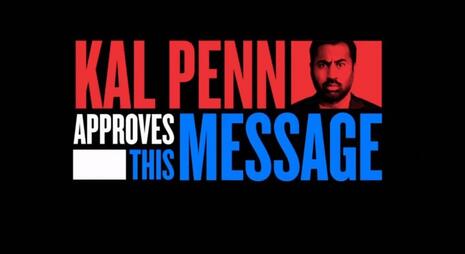 The September 22 episode “Kal Penn Approves Our Democracy” focused predominantly on encouraging young people to vote. Now, it’s clear from the fact that this show is on Freeform and features ads for things like Covergirl and Dove that the entire show is targeted towards a younger audience. However, host Kal Penn insists that his show will be different by offering solutions instead of polarizing behavior. Unfortunately, the series headed by a former Obama White House staffer doesn’t exactly play well to both sides.

For one thing, while Kal didn’t talk up liberal candidates, he certainly hyped up other liberals. A portion of the half-hour episode was an interview with the clearly anti-GOP activist Dolores Huerta who was hailed as “a Civil Rights hero – one of the most iconic activists in American history.” The segment mostly consisted of Penn asking how she’d motivate young people to vote. Despite it being a supposedly “non-partisan” show, Huerta said, “We wanna get progressive people elected.”

Penn showed clips of young liberal voters who don’t think it’s worth it to vote, which gave Huerta an opportunity to spew her leftist talking points. For example, she used one question to start railing for a wealth tax on the 1%.

Alexander: Every four years, we elect a new leader. However, every year we have more homeless, more endangered animals, and the wealth gap between the 1% and the 99% grows ever more.

Kal: And what do you say to somebody like Alexander, who says, “I’m not gonna vote because the wealth gap keeps increasing and increasing, and no matter who you vote for, it just doesn’t make a difference”? How do you even–how do you counter that?

Dolores: Well, I have to say to Alexander, there is a way to change that, Alexander. And that is by voting. When we’re voting, we’re actually thinking, “How do we bring resources into our community?” And if we don’t vote, then all of the resources that we had, they go up to the top. As we know right now in the United States, we have 1% of the wealthy families that have–own 50% of the wealth. And if you add the 10% of the wealthy corporation, they own 90% of the wealth. Okay? So we’ve gotta change this around. We’ve gotta do a wealth tax. We’ve gotta bring some of that money back to our community. How do we do that? By voting. It’s the only way. By voting.

Kal: What about this one?

Victoria: Tennessee always goes Republican, therefore, my liberal vote is negated. And that is why I won’t be voting.

Another part of the show was devoted to speaking to the political group Vote 16, an organization dedicated to lowering the voting age to 16. A preview for next week’s episode even promoted an interview with Hillary Clinton on today’s issues. Between this and Huerta calling for “progressive” people to get elected, apparently, “non-partisan” in this series means no party beyond the Democrats.

Then there’s the “humor” of the show. Kal says he wants to be “funny and uplifting” and “as non-partisan as possible,” but the jokes in this single episode proved to be the exact opposite of all those things. One zinger to inspire the reluctant youth to vote went, “Like, okay, if Gwyneth Paltrow was running for president, you might strongly disagree with her vitamin-infused toilet paper policy, but she maybe supports tuition-free college by taxing the rich, right?” Another joke included the punchline, “Okay, the thing is, as weird as this feels to say… Mike Huckabee is not entirely wrong.” I might need another show to explain how these lines was funny, uplifting, or non-partisan.

Then there’s a sketch involving his friend Moses Storm meeting with the Vote 16 group. Inspired by their actions, he decides to make an insulting infomercial encouraging the elderly not to vote on their behalf. It’s even less funny than it sounds.

Woman 1: A lot of people out there are worried about young people voting. But it’s us old people the ones we have to worry about. First of all, we’re impulsive.

Man 1: We gave our life’s savings to a stranger who sent us an email.

Man 2: Try saying “Happy Holiday” to me instead of “Merry Christmas.”

Man 3: I don’t know if I’m indoctrinated. I just feel that anybody that doesn’t agree with my politics is a pedophile. And a vampire.

Woman 2: Seriously, you can’t trust our judgment. We’re the people that made “The Help” trend.

Woman 3: Did you hear what those [bleep] saying about “The Help”?

Man 3: Until a minute ago, I thought this was the DMV. You really want me picking the president?

Woman 1: Please help us stop people over 72 from voting. We can’t be trusted with this responsibility.

Woman 1: I was told there was gonna be free soup. Where the [bleep] is my soup?

To their credit, the representatives from Vote 16 denounce it saying that their message is about expanding, not restricting voting rights. However, the fact that the show dedicated a full minute to this sketch doesn’t exactly work in its favor, especially when older voters are more likely to vote Republican. Even I would think National Voter Registration Day deserves better than that.

Kal Penn Approves This Message will run for the next six weeks up until the election. Let’s hope after that we can put this show along with the rest of 2020 behind us.