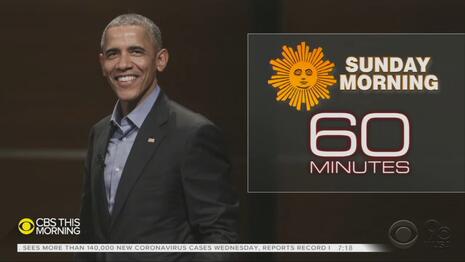 As I reported on Thursday, Gayle King, a Democratic donor, had been awarded the first interview with the former President as he promotes his new book. It’s not hard to see why the woman who vacationed with the Obama family was chosen.

King previewed the interview on Friday’s This Morning and the full interview will air on Sunday. The early indications are not positive if you care at all about objectivity. The co-host encouraged Obama to lash out at Donald Trump: “I remember you inviting Donald Trump to the White House. I’ll never forget it because you said, ‘I wish you succeed because we want the country to succeed.’ What is at stake here?”

King complained, “But [Trump’s] getting support from members of the Republican Party who are not challenging him!” 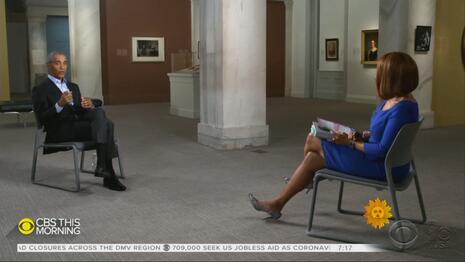 It’s incredible that the men and women who run CBS News think it’s okay for someone who vacationed with Barack and Michelle Obama, who donated to the Democrat’s campaign, should interview the former president.

To read more on just how much of a partisan Democrat Gayle King is, go here.

The Obama propaganda was sponsored by Chase and JC Penney. Click on the links to let them know what you think.

A transcript of the segment is below. Click “Expand” to read more.

GAYLE KING: Former President Barack Obama is speaking to CBS News in his first TV interview since the 2020 election. He’s about to release his long awaited memoir. It’s called A Promised Land. Scott Pelley interviewed the 44th president for 60 Minutes and we got to sit down with him for CBS Sunday Morning. President Obama reflected on the start of his own administration and how his experience was very different from the transition that President Trump is blocking right now.

BARACK OBAMA: When Donald Trump won, I stayed up until 2:30 in the morning and I then called Donald Trump to congratulate him. His margin of victory over Hillary Clinton wasn’t greater than Joe Biden’s margin over him.

OBAMA: But if you’re listening to some of the talk radio that Trump voters are listening to, if you’re watching Fox News, if you’re getting these tweets, those allegations are presented as facts. So you’ve got millions of people out there who think, “oh, yeah, there must be cheating because the president said so.”

KING: I think about John McCain calling. George and Laura Bush welcoming you and Michelle Obama to the White House.

OBAMA: Could not have been more gracious.

KING: I remember you inviting Donald Trump to the White House. I’ll never forget it because you said, “I wish you succeed because we want the country to succeed.” What is at stake here?

KING: But he’s getting support from members of the Republican Party who are not challenging him!

KING: And that has been disappointed. They obviously didn’t think there was any fraud going on because they didn’t say anything about it for it the first two days. But there’s damage to this because what happens is that the peaceful transfer of power, the notion that any of us who attain an elected office, whether it’s dog catcher or president, are servants of the people. It’s a temporary job. We’re not above the rules. We’re not above the law. That’s the essence of our democracy.

KING: And you can see more of our conversation this Sunday on CBS Sunday Morning and Scott Pelley’s interview with former President Obama Sunday night on 60 Minutes. So I think CBS got a one-two punch. We’re very grateful for that. We were at the National Portrait Gallery, which is a very interesting setting because you have the portrait of President Obama and the portrait of Michelle Obama. And the book, as I mentioned a couple times, Anthony, is over 700 pages. So there’s a lot of information to cover. Is it every day? There’s a lot of information, but we talk about the start of his presidency, the bumps along the way, regrets he’s had, rediscovering life and love with Michelle again.

TONY DOKOUPIL: It’s a great setting because that gallery is about legacy. There’s a little plaque next to every picture and it’s’ a legacy plaque.

KING: We all felt very proud to be there. Thanks, President Obama.