When it comes to debating the removal of  statues of Confederate generals, it’s clear Associated Press thinks one side doesn’t have “very fine people” on it. Reporter Sarah Rankin explained the legal tussles over the (now-vandalized) Robert E. Lee statue on Richmond’s Monument Avenue, and only one side was quoted. It began: 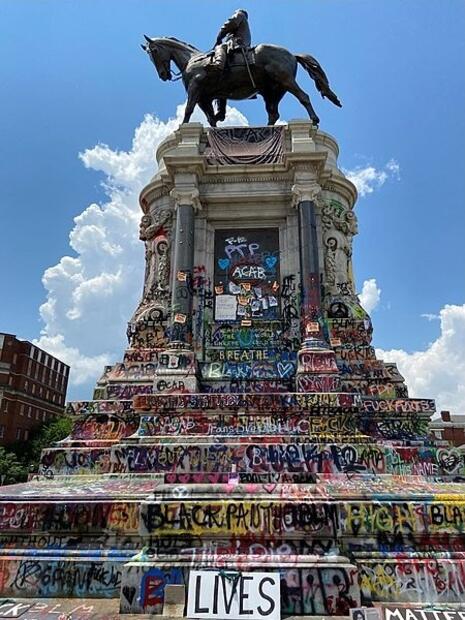 RICHMOND, Va. (AP) — A lawsuit seeking to prevent Virginia Gov. Ralph Northam’s administration from removing an enormous statue of Confederate Gen. Robert E. Lee can proceed, a judge ruled Tuesday, clearing the way for a trial in the fall.

Richmond Circuit Court Judge W. Reilly Marchant rejected much of the state’s motion to dismiss a lawsuit filed by a group of property owners along the residential boulevard where the statue is situated. He did narrow the claims that can proceed, dismissing one count entirely and dismissing two plaintiffs from another claim.

The decision at least further delays Northam’s plan, which he announced in early June, citing the pain felt across the country about the death of George Floyd, a Black man who died under the knee of a white Minneapolis police officer as he struggled to breathe.

Rankin explained the graffiti-laden Lee statue “and other nearby monuments have become a rallying point during social justice protests and occasional clashes with police.”

Virginia’s top Democratic officials were quoted, but the plaintiffs were merely summarized with legal technicalities from their lawyer. All the emotional ardor was on one side.

Attorney General Herring remains committed to ensuring this divisive and antiquated relic of a bygone era is removed as quickly as possible,” spokeswoman Charlotte Gomer said in an email.

Patrick McSweeney, an attorney for the plaintiffs, said the judge’s dismissal of one claim doesn’t significantly impact his clients’ case.

Alena Yarmosky, Northam’s spokeswoman, said in a statement that the governor was confident in his authority to remove the statue “and he looks forward to winning in October.”

Kat McNeal, a member of the Virginia Defenders for Freedom, Justice & Equality who has participated in the protests, said she is confident the statue will eventually be removed and is not especially concerned about how long it takes.

“It’s coming down, no matter what,” she said. “This has been a longstanding issue in Richmond, especially for the Black community. That statue is a slap in the face, it is a shrine to white supremacy, and it needs to come down and it will come down.”

Those who believe removing the statue is erasing U.S. history are not respectable enough for inclusion, according to the Associated Press, which also displays its “racial justice” sensitivities as it now capitalizes “Black” and not “white.”