NPR, WashPost Embarrass Themselves on Buttigieg’s Romance with Transportation 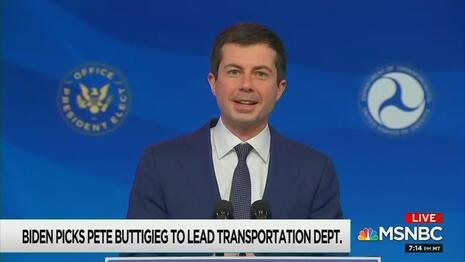 Conservatives were amazed at NPR and The Washington Post listing pseudo-qualifications for Joe Biden naming Pete Buttigieg Secretary of Transportation.

The NPR Politics Twitter account messaged on Wednesday night: “Pete Buttigieg, President-elect Biden’s pick for transportation secretary, said he has ‘a personal love of transportation,’ recounting train trips on Amtrak while in college, and said he proposed to his now-husband, Chasten, in an airport terminal.” Ben Shapiro summarized the tone pretty well:

NPR: So, why should you be Secretary of Transportation?
Buttigieg: I love choo-choos and planes that fly!
NPR: Good enough for us! https://t.co/VrnJXCaS7L

NPR linked to a thinly disguised Biden Transition Team press release by NPR’s Brian Naylor. There was no need for a reaction from Republicans.

Early on Thursday morning, The Washington Post followed suit with this tweet: “Pete Buttigieg is right. Airports are romantic.” This linked to a story by Post dating-and-relationships feature writer Lisa Bonos.  Buttigieg spoke about how travel, in his mind, “is synonymous with growth, with adventure — even love.” Then he joked: “So much so that I proposed to my husband Chasten in an airport terminal. Don’t let anybody tell you that O’Hare isn’t romantic.”

After Buttigieg’s comments Wednesday, O’Hare Airport’s Twitter feed put “place of romance” in its bio and shared an image from Gate B5, where the magic happened. “Thank you for appreciating all the connections we make possible @PeteButtigieg,” the airport tweeted. “Looking forward to working with you as we continue to make our airport lovable for decades to come.”

This is pretty typical for the Post. Back on November 9, Bonos wrote a gushy piece headlined “Kamala Harris’s marriage inspires so many of us still searching for our Dougs.” It included lines like this: “On social media, he’s effusive about the love and pride he has for his wife — and Biden-Harris supporters eat it up. Emhoff fans refer to themselves as the #Doug­Hive, a play on Beyoncé’s BeyHive….For those of us still looking for a relationship that makes us smile that wide, their bond has a way of signaling: Keep looking. Your Doug is out there.”

Again, Ben Shapiro sums it up:

This is a news piece in the “Lifestyle” section. It is not in the opinion section. Democracy dies in slobbering sycophancy. https://t.co/GlLrjLIjtX