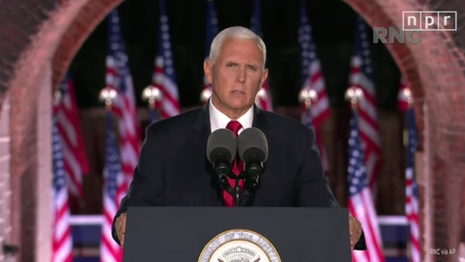 The New York Times in Thursday’s edition set the table for the paper’s coverage of Night Three from the Republican National Convention (most live coverage was online due to print deadlines).

The criticism of Mr. Biden, the former vice president, has been harsh. Republicans have mocked his faith; attacked his family and personal ethics; derided his long service in Washington; cast him as a creature of the past; and criticized his cautious campaign style and his penchant for verbal miscues, including clumsy remarks about race for which Mr. Biden has apologized.

Matt Flegenheimer and Katie Glueck’s “news analysis,” “Republicans Insist Only Trump Can Stop This Chaos. But He’s in Charge Now,” accused the party of “something closer to a wholesale rewriting, spinning alternate histories that assume the country’s crises have passed, Senator Bernie Sanders is their caricature-ready progressive opponent and Mr. Trump, depending on the issue, is not in a position of authority.”

On Night Three, the Times also forensically fact-checked the broad campaign rhetoric of Republican convention speakers in a way they failed to do during the Democrats’ virtual convention.

Reporter Nicholas Corasaniti was offended by a quote from speaker and legendary college football coach Lou Holtz: “The Biden-Harris ticket is the most radically pro-abortion campaign in history. They and other politicians are ‘Catholics in Name Only’ and abandon innocent lives.”

Corasaniti bizarrely declared that “False” but offered a weak rebuttal:

Like most Democrats, Mr. Biden supports abortion rights and has said he would codify Roe v. Wade into federal law and restore federal funding to reproductive-care facilities like Planned Parenthood. But he only reversed his support for the Hyde Amendment, which bars using federal money for most abortions, last year. And he has grappled for years over the issue of abortion. There is no evidence that his campaign is more radical about abortion rights than most recent Democratic candidates.

While there is plenty of room for subjective judgments about religious tenets and there are deep divisions between left and right about how politics should intersect with faith, Mr. Biden is a practicing Catholic. His wife, Dr. Jill Biden, said in her speech at the Democratic National Convention that her husband’s “faith is in the providence of God.”….

(Incidentally, why is Jill Biden, an English professor with a doctorate, identified as “Dr. Jill Biden,” but Ben Carson, a neurosurgery pioneer who separated twins co-joined at the head, sometimes has no honorific in the Times, but is merely “Ben Carson”?)

Another claim, from Michael McHale, president of the National Association of Police Organizations:

Unfortunately, chaos results when elected officials in cities like Portland, Minneapolis, Chicago and New York make the conscious and very public decision not to support law enforcement. Shootings, murders, looting and rioting occur unabated. The violence we are seeing in these and other cities isn’t happening by chance; it’s the direct result of elected leaders refusing to allow law enforcement to protect our communities.

Official fact-checker Linda Qiu responded: “This is exaggerated.” But again, the rebuttal was weak.

Across 25 large American cities, violent crime has risen by about 0.4 percent compared to the same period last year, according to the latest available data assembled by crime analysts at the consulting firm AH Datalytics. That’s a small uptick, not quite the lawless chaos Mr. McHale portrayed. He is correct, however, that murders have increased 26 percent.

But maybe the most galling fact check appeared on Tuesday night, as reporter Sheryl Gay Stolberg defended Planned Parenthood founder Margaret Sanger, denying the overwhelming evidence that she was a racist and eugenicist who wanted to suppress the minority population.

Margaret Sanger, the sex educator who opened the first birth control clinic in the United States in 1916, did find common ground with those who advocated eugenics, the widely debunked theory that the human race could be bettered by encouraging people with traits like intelligence and hard work to reproduce. But there is no evidence that she was a racist who intended to “eradicate the minority population.”

Stolberg used liberal fact-checks from National Public Radio and a New York University project to defend Sanger from the accusation.