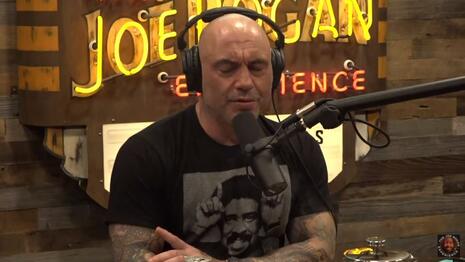 The front of the Sunday Business section of the New York Times featured a nearly 5,000-word profile by Matt Flegenheimer of podcaster Joe Rogan: “Joe Rogan Is Too Big To Cancel – His success lies in making audiences feel as if they’re in on something subversive.”

Rogan, whose hugely popular podcast is now hosted on the music streaming service Spotify, is known for his wide range of interviewees from all parts of the culture and political spectrum. He was a supporter of left-wing candidate Bernie Sanders. Yet Rogan’s mocking of cancel culture, self-righteous Hollywood, the pro-Biden media and other liberal sacred cows have put him in the crosshairs of the Very Online left.

Even the Times’ headline comes across as wishful thinking, as if it really is on their minds to bring Rogan down for the thoughtcrimes he is getting away with.

Rogan didn’t talk to Flegenheimer, but he found plenty of people to gossip about Rogan’s years as a stand-up comic, as if to make him seem threatening:

The other comics called him “Little Ball of Anger” — semi-affectionately, never to his face — a man flammable by bearing and branding, it seemed, with his taekwondo muscles and a scorching conviction that the Bible had some holes.

Now, for better or worse, many millions of people are hearing what Joe Rogan is saying….

Such little cheap shots are littered throughout the profile, which don’t appear in profiles of even the most left-wing media personalities. One can sense subtle attempts to discredit Rogan throughout the enormous story.

Mr. Rogan, 53, is one of the most consumed media products on the planet — with the power to shape tastes, politics, medical decisions –a fact well-known to legions of men under 40, nonsensical to the many Rogan-unaware over 50 and befuddling, by his own admission, to the man himself. His podcast, “The Joe Rogan Experience,” is effectively a series of wandering conversations, often over whiskey and weed, on topics including but not limited to: comedy, cage-fighting, psychedelics, quantum mechanics and the political excesses of the left….

What is different now — exhilarating to his fans, alarming to others — is the social capital he managed to accumulate while proudly defying the traditional gate-keeping strictures of mainstream fame….

Flegenheimer dismissed Rogan’s fears of “cancel culture,” in a story with “cancel” in the headline.

….he has proved uniquely skilled in the kind of cultural combat that lifted the former president: projecting shared disdain for elite groupthink and liberal hypersensitivity. “You can never be woke enough — that’s the problem,” Mr. Rogan complained in May, riffing on the perils of cancel culture and suggesting that “it’ll eventually get to ‘straight white men are not allowed to talk.’”

Yet there is also a hitch in this construction, the bracing counterexample that is Joe Rogan, White Man Talking: He has long said what pleased him, offended polite society and warned of the reputational risks in pursuing such a life. For his sins, he has been burdened with a staggering fortune and a global reach.

A stream of snotty remarks followed, including from a well-known puffball Obama interviewer:

For listeners, the attachment is visceral, communal — a “monoculture of free-thinkers,” as Marc Maron, the fellow podcaster and comedian, has said of the Rogan-inclined masses, tweaking a group that can descend on its targets as an online bloc.

Odd how the Times only finds social media mobs a problem when non-leftists pile on them:

….When The New York Times emailed one such Rogan friend, Tim Dillon, asking to chat about the host, Mr. Dillon responded with an expletive and posted the exchange to his hundreds of thousands of followers on social media. What followed was a striking testament to Mr. Rogan’s eclectic constituencies and their assessment of his treatment in the press.

“New York Times Gearing Up for Hit Piece on Joe Rogan,” read one segment chyron on the right-wing One America News Network.