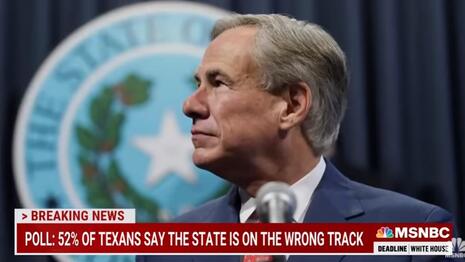 It’s the latest entry in what has amounted to a series of random stories the Times has been constantly running for a decade, all with the same dopey liberal media idea that Texas is running ever-scarily to the right. (Is there any room left to run by now?) The paper’s trend has accelerated under Republican Gov. Greg Abbott.

In July, it was “Can Texas Turn Further Right? Top 2 Republicans Say It Can.” Less than two weeks before that, another headline read “Texas Governor Pushes State Further to the Right On Voting Rights and Race.”

And every story is laced with ridiculously excessive ideological labeling of conservatives.

The story’s tone was no more friendly to conservatives:

At a roadside bar on farm road 359, where the sprawl of Houston gives way to horse stables and hay rolls, Cindy Schmid and her friend Gail Mikeska gather every Thursday to eat, drink and talk about everything: family, country music, the hard right turn of Texas politics.

“We think very differently politically,” said Ms. Mikeska, a conservative who owns more than one gun and is generally happy with the trajectory of the state.

“I’m a Democrat,” said Ms. Schmid, whose only gun is an inoperable Civil War antique. “I think Texas is losing its freaking mind.”

That anecdote was a tone-setter.

In the span of a few months, the nation’s second most populous state followed what was perhaps the most conservative legislative session in state history with a special session packed with even more of the prerogatives of the right flank, a pronounced political shift that has caught even many conservative residents off guard. The Legislature is set to convene another special session Monday to consider further laws on cultural issues, such as transgender athletes, and to redistrict the state, likely in favor of Republican members.

Of course, it made some (unidentified liberal) people angry and sad.

Add to that a surge in coronavirus cases and an ongoing tug of war over the pandemic response between Gov. Greg Abbott, a Republican, and Democratic leaders in growing urban centers, and the mood among many Texans has turned glum….

Many attributed the lurch to the ultraconservative primary challengers taking on Mr. Abbott. Some complained that the tradition of comity and compromise in the Capitol had all but gone away, leaving Austin — where Democratic and Republican lawmakers still sit intermingled, without a dividing aisle — feeling no less partisan than Washington.

Goodman may have even pretended to hint that what’s going on in Texas could be caused by…Satan?

Exactly 666 new laws went into effect on Sept. 1, including a ban on abortions after cardiac activity is detected, or roughly six weeks into pregnancy, a measure that has stopped nearly all abortions in Texas and is the most restrictive in the nation.