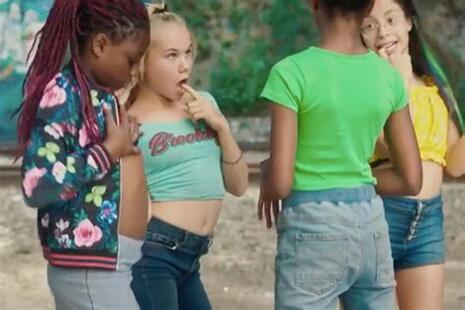 Cuties, a French movie which hypersexualizes little girls, recently dropped on Netflix to broad controversy. But the New York Times has joined much of the media elite in condemning not the film but its critics, lumping them in with QAnon conspiracists, while noting the movie is an award-winner and besides, the French didn’t seem to mind (more on the French later).

Times reporter Christina Morales summarized the debate in a piece posted Saturday, “‘Cuties’ Sparks a Firestorm, Again, After Its Netflix Release — Several members of Congress have weighed in on the award-winning film, including to call for its removal from Netflix or a Justice Department investigation.”

Netflix is facing renewed backlash from subscribers and members of Congress after it released the award-winning French film “Cuties” on its platform this week.

“Award-winning” apparently covers for all sorts of moral sins.

The film, which was released as “Mignonnes” in France and won a directing award from the Sundance Institute in February, follows an 11-year-old girl named Amy (Fathia Youssouf) as she tries to find her place growing up in a poor suburb of Paris. At home, Amy has to please her family, who are observant Muslims from Senegal, but she eventually falls in with a group of friends who have their own dance troupe in defiance of her family’s strict rules.

In France, where the film was released in theaters on Aug. 19, “Cuties” did not stir much controversy.

But in the United States, the hashtag #CancelNetflix has trended on Twitter, with parents, politicians and conspiracy theorists calling to remove the film or even get the Department of Justice involved. Last month, Netflix apologized for the artwork it created to market “Cuties” to streaming audiences after many criticized it for inappropriately sexualizing the film’s young stars.

Calls to remove the film have been amplified by supporters of a conspiracy theory that top Democrats and celebrities are behind a global child trafficking ring.

Reviewers at the Sundance Film Festival didn’t find the film exploitive. “The sight of twerking preteen bodies is explicitly designed to shock mature audiences into a contemplation of today’s destruction of innocence,” the film critic Fionnuala Halligan wrote in Screen Daily.

After acknowledging Republican senators Ted Cruz of Texas and Tom Cotton of Arkansas have asked for a Justice Department investigation, Morales pounced:

But like many of the film’s detractors, Mr. Cruz has not seen “Cuties,” according to a spokeswoman.

Representatives for Mr. Cotton and Ms. Gabbard did not immediately respond to requests for comment on Saturday, and it was not clear whether either had seen the film.

A few weeks ago, the headline deck over Times reporter Alex Marshall’s piece tried to delegitimize any criticism of “Cuties” by playing the overblown “conspiracy” card:

“Netflix, Accused of Sexualizing Girls, Pulls Artwork for ‘Cuties’ — Conspiracy theorists and concerned parents complained about the image associated with “Cuties,” a French film that examines how children are encouraged to be sexualized.”

As if one has to be a QAnon wacko to be disturbed by a film that lingers over scenes of prepubescent girls making sexually provocative dance moves.

To the argument that the filmmakers were intending to condemn such preteen sexualization, the parallel would be to that of a movie that purports to condemn animal abuse, yet features actual animals being abused in the process of making the film.

Calls to remove the film have gained particular traction among supporters of the QAnon conspiracy theory, who believe top Democrats and celebrities like the artist Marina Abramovic are behind a global child trafficking ring. “Netflix just normalized pedophilia,” one QAnon-supporting Facebook page posted on Friday.

In France, where the film was released in theaters on Aug. 19, “Cuties” has not stirred any controversy….Reviewers at Sundance didn’t see the film as fetishistic either….

The Times is operating under the delusion that being non-controversial in France is a positive thing. Until a few years ago in France one could be both a proud public pedophile and a renowned author, like Gabriel Matzness, whom the Times itself discussed in a front-page story just last Friday.